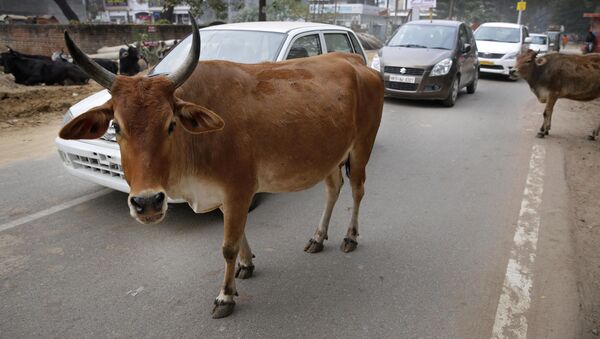 A labourer is accused of raping five cows at a cattle shelter in India after horrified staff saw the surveillance footage of the incident.

The man was arrested after cattle shelter volunteers claimed they saw him committing the perverted acts, in Uttar Pradesh, northern India, writes the Mirror.

Shelter workers lay in wait for the offender to return to the scene of his perverted offences after seeing a number of cows being sexually assaulted. They “brutally thrashed him” before summoning the police, according to local reports.

The man claimed he was drunk at the time and could not remember anything following the shocking incident in India, where cows are considered sacred.

Police inspector Jagdish Upadhyay said: “The accused was identified as Raj Kumar who works as a contractual labourer.”

“He was under the influence of alcohol when he was brought to the police station.”

“They came across this footage of a man involved in the act,” the inspector said.

“Since then, volunteers have started keeping a vigil.”

Asia
A Quarter of Rape Cases in India are a Result of Failure to Marry – NGO
Kumar allegedly sexually abused cows at the Karatliya Baba Ashram shelter.

A distraught local priest, Ram Das, said: “CCTV footage shows the man doing dastardly acts with cows one by one”.

“We have caught him and brought to the police station.”

Gaushalas, as cattle shelters are called in India, are set up to protect the animals due to their religious significance in Hinduism.

In a similarly abusive incident last July, eight men sparked outrage for gang-raping a pregnant goat in Mewat in the northern state of Haryana.