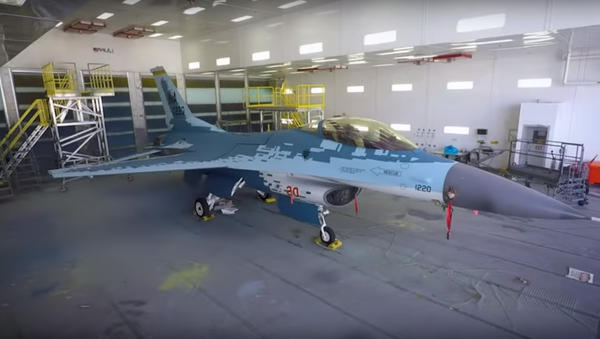 © Photo : YouTube/US Military Update
Subscribe
International
India
Africa
The fighter jet sporting this unusual paint job is part of an “aggressor squadron”, tasked with performing the role of an opposing force during drills and wargames.

The US Nellis Air Force Base recently released the footage of the first flight of one of its F-16 warplanes sporting the 'Ghost' paint scheme which mimics that of the Russian Su-57 fifth-generation stealth fighter.

"Let us know if you caught a glimpse of the #Ghost on its first flight today! Here are some highlights of all the action!" reads the video's caption, posted on the AFB’s Facebook page.

Prior to the maiden flight of the “Ghost”, its paint scheme and application process were unveiled last week on YouTube.

The F-16 fighter in question is part of a so called “aggressor squadron”, which acts as a hostile during wargames.