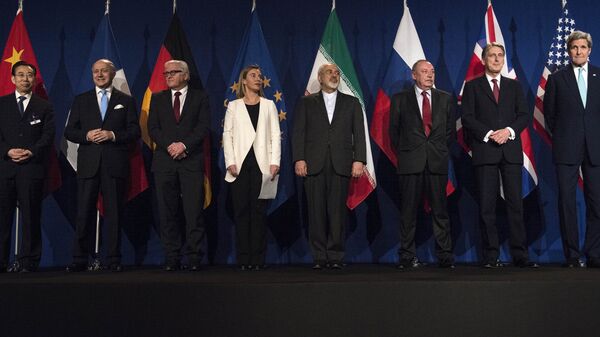 © AP Photo / Brendan Smialowski
Subscribe
International
India
Africa
On 8 May, Iran announced a decision to partially discontinue its obligations under the 2015 Iran nuclear deal, also known as the Joint Comprehensive Plan of Action (JCPOA). Tehran gave European signatories 60 days to ensure that Iran's interests were protected under the agreement.

Iranian Foreign Minister Javad Zarif has urged EU states to stick to the 2015 Iran nuclear deal, stressing that they should do more to preserve what is also known as the Joint Comprehensive Plan of Action (JCPOA).

Speaking to reporters after talks with Iraqi counterpart Mohammed al-Hakim in Baghdad, Zarif called for “practical actions” to be taken with respect to the JCPOA, adding that talk is not enough.

READ MORE: Iran: 'Situation' Not Suitable for Talks With US, Resistance Only Choice

Separately, he underscored Iran's determination to tackle any war effort against the Islamic Republic, including military or economic aggression.

Zarif also indicated Tehran’s intent to develop balanced ties with nearby Persian Gulf countries, adding that Iran had proposed inking a non-aggression pact with them.

The statement comes after General Morteza Qorbani, an adviser to Iran’s military command, told the semi-official Iranian news agency Mizan on Saturday that Tehran may use its “secret” weaponry to sink US warships which were earlier sent to the Persian Gulf region.

“America […] is sending two warships to the region. If they commit the slightest stupidity, we will send these ships to the bottom of the sea along with their crew and planes using two missiles or two new secret weapons,” Qorbani said.

This was preceded by 76 US retired generals, admirals and ambassadors signing an open letter to US President Donald Trump urging him against forging a war with Iran.

“A war with Iran, either by choice or miscalculation, would produce dramatic repercussions in an already-destabilised Middle East and drag the United States into another armed conflict at immense financial, human, and geopolitical cost,” the letter read.

This comes amid ongoing tensions between Iran and the US which further escalated on 8 May, when Tehran announced that it would backtrack on some of its “voluntary” commitments under the JCPOA.

Shortly after, the US reinforced its military presence in the Persian Gulf with the Abraham Lincoln aircraft carrier and a bomber task force, a move aimed at sending “a clear and unmistakable message” to Tehran.

Additionally, Washington deployed Patriot missile defence systems and an Arlington amphibious warship to the region, while Iran expressed its readiness to retaliate in case of a possible military conflict.

The US unilaterally pulled out of the JCPOA on 8 May 2018, when President Trump also announced that he was reinstating anti-Iranian sanctions.