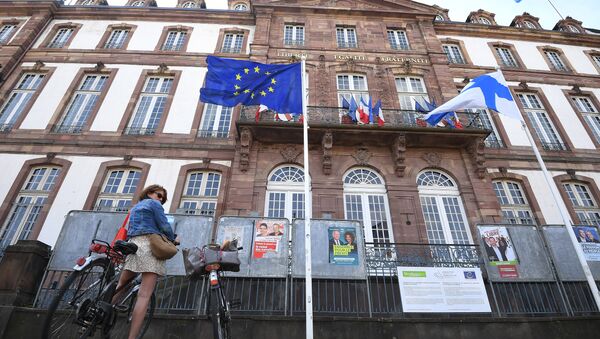 © AFP 2021 / PATRICK HERTZOG
Subscribe
European Parliament elections kicked off on Thursday all over the European Union.

The UK, after extended its Brexit deadline for six months, participated in the vote as well as citizens in the Netherlands on Thursday. On Friday, voters from the Czech Republic and Ireland cast ballots for EU parliamentarians. Slovakia, Latvia, and Malta held their vote on Saturday.

On Sunday, the final day of the European Parliament elections, the bulk of the voting takes place, with all the remaining EU countries heading to the polls.

EU voters will vote from Thursday to Sunday to elect members of European Parliament. According to EU parliament data, more than 426 million European citizens are eligible to vote. Each country sets its own election day.

The new members of the 751-member European Parliament will serve a five-year term, from 2019 to 2024, and spend their time between two EU Parliament buildings, in Strasbourg and Brussels.

The parliament passes EU laws (directives and regulations) and approves the EU budget, along with the European Council, which comprises the heads of state of each country. The European Parliament also helps to choose the president of the European Commission and select EU civil servants.

The largest political grouping after the elections has the strongest mandate to have its choice candidate at the helm of the European Commission.

READ MORE: European Parliament is ‘a Form of Bribery and a Smoke Screen’ — Polexit Founder

Migration reportedly remains a crucial issue, with a number of parties well-known for their tough stances on migration policy competing for EU Parliament seats.

000000
Popular comments
Stupid farking sheeple!!! What the fark are they voting for??? It will be rigged just like the same as French/German elections. Whatever you vote for, it WONT be happening!!!