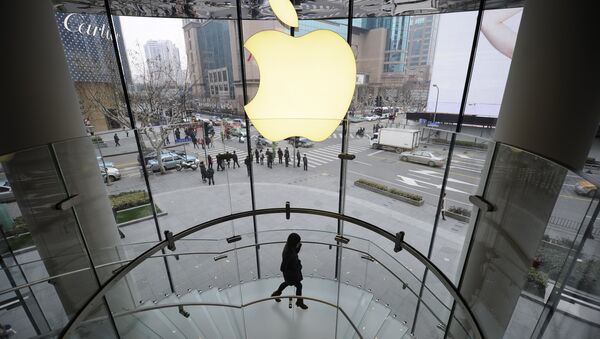 © AFP 2021 / PETER PARKS
Subscribe
The founder of the Chinese technology giant Huawei, Ren Zhengfei, has said in an interview with Bloomberg that he would be "the first to protest" if Beijing retaliates against the US-based tech giant Apple.

A Bloomberg reporter has asked the Huawei CEO in an interview whether he would retaliate against Apple amid "calls by some in China" to take countermeasures against the US company.

"That will not happen, first of all. And second of all, if that happens, I'll be the first to protest. Apple is the world's leading company. If there was no Apple, there would be no mobile internet. If there was no Apple to help show us the world, we would not see the beauty of this world. Apple is my teacher. It's advancing in front of us. As a student, why should I oppose my teacher? I would never do that", Ren Zhengfei has told Bloomberg in an interview, published on Sunday.

Huawei: China Prepares Law That May Ban US Tech Firms From Its Market − Report
US President Donald Trump issued an executive order earlier in May that added Huawei and its 70 affiliates to a trade blacklist, thereby restricting its activity in the country. US companies are hence required to receive permission before trading with the telecom company.

As a result, Google had to suspend business operations with Huawei, including the transfer of all hardware, software and technical services, except those publicly available via open source licensing. This move has already impacted the telecom giant, with several mobile carriers, such as UK Vodafone and EE suspending their launches of new Huawei products.

The standoff between Huawei and Apple was sparked by the December arrest of Huawei Chief Financial Officer Meng Wanzhou, the daughter of Huawei's founder in Canada, for alleged violations of US sanctions on Iran. Beijing decried the move and demanded that Canada immediately release the Chinese national.

Apple Warned of Troubles in China Amid US Crackdown on Huawei
In January, the Chinese telecom giant punished staffers who used an iPhone to send an official company tweet amid a standoff between the two tech giants. In an internal memo, published online by Chinese media, Huawei said those responsible were demoted and had their salaries slashed by $730.

Meanwhile, US Secretary of State Mike Pompeo claimed on Thursday that the Chinese tech giant allegedly had close links to not only the Chinese government but also to the Chinese Communist Party. He said that these ties significantly threatened any US-related information that passed via Huawei's devices. Pompeo also said the State Department expected more companies worldwide to cut ties with Huawei in the future.

The Chinese Foreign Ministry said Friday that Pompeo's remarks were made in an attempt to stir up ideological resistance against the company.

Last year, the United States, Australia, Japan, and New Zealand banned the company from participating in government contracts due to security concerns. Huawei has vehemently denied all allegations of spying.

Слађана
27 May 2019, 03:04 GMT8
000000
Слађана, I may be wrong of course but after watching him on CNN, I picked up several things, 1- he said Apple is a great company, 2- Trump is a great President and 3 - his daughter can look after herself. Now reverse those comments and think about the political speak he is using, very clever I thought and not at all emotional
brwnxpng
27 May 2019, 03:27 GMT2
000000
Newsfeed
0
New firstOld first
loader
LIVE
Заголовок открываемого материала
Access to the chat has been blocked for violating the rules . You will be able to participate again through:∞. If you do not agree with the blocking, please use the feedback form
The discussion is closed. You can participate in the discussion within 24 hours after the publication of the article.
To participate in the discussion
log in or register
loader
Chats
Заголовок открываемого материала
Worldwide
InternationalEnglishEnglishMundoEspañolSpanish
Europe
DeutschlandDeutschGermanFranceFrançaisFrenchΕλλάδαΕλληνικάGreekItaliaItalianoItalianČeská republikaČeštinaCzechPolskaPolskiPolishСрбиjаСрпскиSerbianLatvijaLatviešuLatvianLietuvaLietuviųLithuanianMoldovaMoldoveneascăMoldavianБеларусьБеларускiBelarusian
Transcaucasia
ԱրմենիաՀայերենArmenianАҧсныАҧсышәалаAbkhazХуссар ИрыстонИронауОssetianსაქართველოქართულიGeorgianAzərbaycanАzərbaycancaAzerbaijani
Middle East
Sputnik عربيArabicArabicTürkiyeTürkçeTurkishSputnik ایرانPersianPersianSputnik افغانستانDariDari
Central Asia
ҚазақстанҚазақ тіліKazakhКыргызстанКыргызчаKyrgyzOʻzbekistonЎзбекчаUzbekТоҷикистонТоҷикӣTajik
East & Southeast Asia
Việt NamTiếng ViệtVietnamese日本日本語Japanese中国中文Chinese
South America
BrasilPortuguêsPortuguese
NewsfeedBreaking
15:23 GMT12 Indian Politicians Suspended From Parliamentary Session, Opposition Brands Move 'Undemocratic'
15:22 GMT'Trying to Keep Fart in Your Pants': Piers Corbyn's Anti-Mask Video Baffles Netizens
15:18 GMTRDIF: New Sputnik V Version Adapted to Omicron Variant in Development
14:44 GMTCOVID-19 Cases Among Fully Vaccinated on the Rise in India As Omicron Variant Fears Escalate
14:23 GMTJack Dorsey Expected to Step Down as Twitter CEO, Media Claims
14:19 GMTDOJ Prosecutors Say Bannon Trying 'to Have His Trial Through the Press' Rather Than in Court
14:03 GMTLabour Cabinet Reshuffle Derails Deputy Leader's Tory 'Sleaze Agenda'
13:55 GMTAcademics: There Are Ways to Solve Channel Crisis But France & EU Unwilling to Help Post-Brexit UK
13:54 GMTIran's Navy to Receive New Domestically Produced Anti-Air Missiles, Drones, Warships
13:33 GMTChina Opposes Visit of Baltic Lawmakers to Taiwan
13:33 GMTWatch Live: Ghislaine Maxwell Trial on Sex Trafficking Kicks Off in New York
13:14 GMTHindu Group Members Barge Into Christian Prayer Hall Alleging Religious 'Conversion' - Video
13:04 GMTPoll: Majority of Scottish People Back Doubling Anti-Poverty Payment in December's Budget
12:55 GMT'Washington Must Stop': Moscow Vows to Respond to Upcoming Expulsion of Russian Diplomats From US
12:52 GMTRussia Could Ink $2Bln in Military Deals With India Amid Modi-Putin Talks, Media Claims
12:51 GMT6.5-Magnitude Earthquake Hits Japan
12:46 GMTJeffrey Epstein's 'Pimp' Ghislaine Maxwell to Go on Trial in New York City
12:25 GMTTwo Reported Dead After Roof Collapses Due to Hurricane in Istanbul - Photos, Videos
12:24 GMTWSJ: Taliban Had Sleeper Agents in Every Major City, Who Aided Swift Downfall of US-Backed Gov't
12:10 GMTFrance Sets 10 December Deadline for End of Fishing License Talks With UK