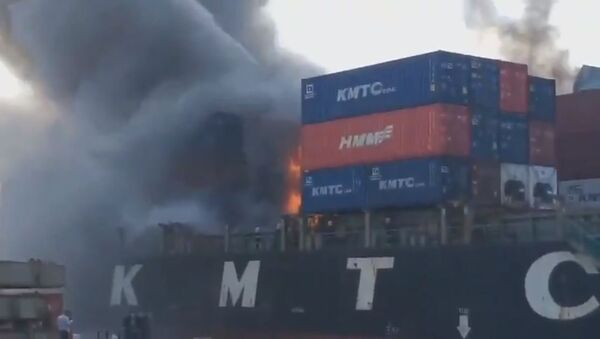 The blast was triggered by a fire that broke out on a cargo ship docked at Laem Chabang port in Thailand's Chonburi Province south to the capital Bangkok.

According to a tweet by international freight forwarder, Trade Expeditors US, the exploded chemicals on the ship were toxic substances.

#Noticetotrade: Class 6.1 Chemical Exploded!!
Several port workers were injured and local people were evacuated following an explosion in a container on a ship at #LaemChabangPort in Chon Buri, Thailand Sri Racha district on Saturday morning. pic.twitter.com/3FLzvOUsl2

However, according to the local police, the cause of the fire as well as the kind of chemicals aboard the vessel is not clear and is currently under investigation.

The port director, Yuthana Mokkhao, declared the district around Laem Chabang a "danger zone". The port chief said that at least twenty people have been taken to hospitals after suffering burns.

Over ten fire trucks as well as rescue teams rushed to the scene to contain the fire. According to Yuthana Mokkhao, the fire was subsequently under control.
Newsfeed
0
Access to the chat has been blocked for violating the rules . You will be able to participate again through:∞. If you do not agree with the blocking, please use the feedback form
The discussion is closed. You can participate in the discussion within 24 hours after the publication of the article.
To participate in the discussion
log in or register
loader
Chats
Заголовок открываемого материала