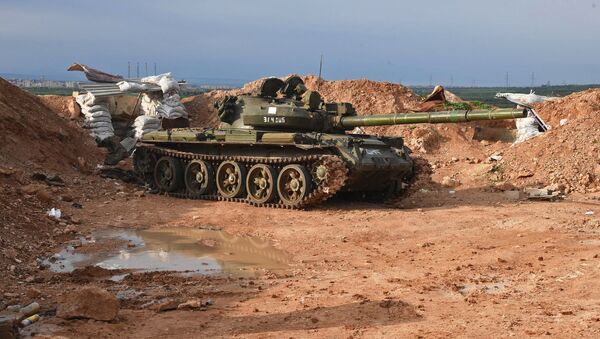 © Sputnik / Mikhail Voskresenskiy
/
Go to the mediabank
Subscribe
International
India
Africa
BEIRUT (Sputnik) - The Syrian government forces responded with fire to constant shelling from the north of Hama province and destroyed terrorists’ missile launchers in the region on Saturday, a source familiar with the situation on the ground told Sputnik.

"Now, the battles are static. The terrorists on a daily basis shell the city of Skalbia and its neighborhoods. Nearly every other day civilian victims of attacks get buried. The army responds to the attacks with fire. Today, it destroyed terrorists’ rocket launchers," the source said.

Terrorists to Use Truck Bombs to Break Through Syrian Army Lines - Russian MoD
According to the source, terrorists are concentrating forces near the town of Kafr Nabudah. The government forces, in turn, are strengthening their positions in anticipation of new attacks.

Over the past few days, terrorists have made at least three large-scale attempts to attack the government forces in the north of Hama province. Tanks, armored vehicles and multiple launch rocket systems were used in the assaults. All the attacks have been successfully repelled by Damascus.

In early May, terrorists increased attack frequency in the Syrian provinces of Hama, Aleppo and Latakia. They have also attempted to attack Syrian army positions in the region. Government forces have taken retaliatory measures boosting attacks on terrorists in the province of Idlib.

Syria has been in a state of civil war since 2011, with forces backing the country's leader, President Assad, fighting numerous opposition groups backed by Western states, as well as militants and terrorist organisations.