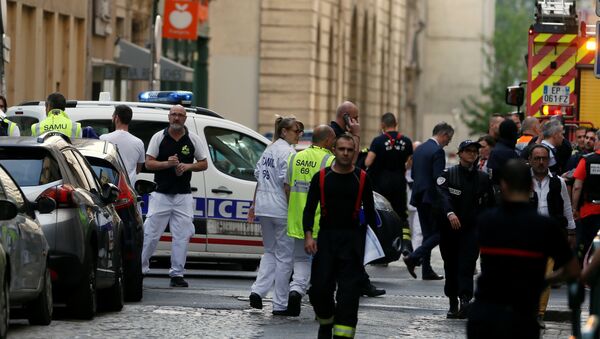 MOSCOW (Sputnik) – The Paris Prosecutor’s Office is considering if the perpetrators of the recent attack in Lyon, which left at least 13 people injured, had conspired to commit a terrorist act, French Justice Minister Nicole Belloubet told BFMTV.

The explosion occurred on Friday in downtown Lyon, near a bakery at the intersection of Victor Hugo Street and Sala Street, near Bellecour Square, one of the city's attractions.

"It is too early to speak about an act of terrorism. The anti-terrorist department of the Paris Prosecutor’s office has been addressed. It began an investigation into a criminal conspiracy to commit a terrorist act but we should wait for the results of the probe which is currently underway and has been referred to the judicial police. Judging from the results, we would further be able to qualify this inquiry [as a terrorist or not]", Belloubet told the broadcaster late on Friday.

Powerful Gas Explosion Reportedly Rocks Scientific Library in Lyon, France
As shown by CCTV cameras, a man, aged 30-35, rode a bicycle to the bakery and set aside a bundle, which subsequently exploded. The police are now searching for the suspect. In the wake of the blast, the Lyon prosecutor's office opened an investigation into attempted premeditated murder.

Meanwhile, a security parameter was installed around the Lyon Perrache Train Station, located in the same district that was hit by the explosion, after a suspicious piece of luggage was found there, according to the local media.