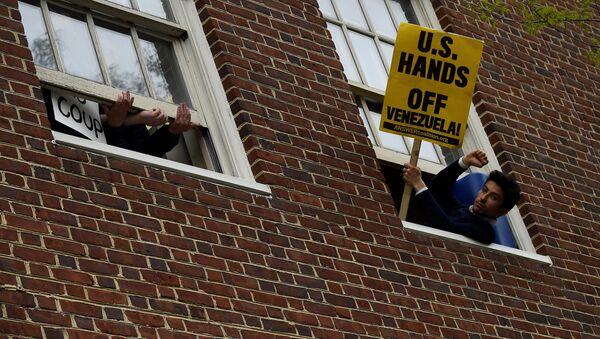 Activists, who had been protecting the embassy of Venezuela on behalf of Venezuelan President Nicolas Maduro's legitimate government for the past weeks, uploaded the video-statement on Twitter, in which they are calling for a "national mass mobilization in New York City on 21 September when the United Nations General Assembly is meeting."

The 74 Session of the United Nation General Assembly (UNGA) will open on 17 September, with the first meeting on the high-level to take place on 24 September.

According to the statement by activists, on 21 September "we'll have a march and a rally, and the next day we'll have a public educational event."

Activists called on people to "plan now, mark your calendar now to come to New York City," noting that they are going to call it "The People's Mobilization to Stop the US War Machine."

It is notable, that the chosen date — 21 September is the International Day of Peace or just "Peace Day", established by the UN in 1981.

Activists with the Embassy Protection Collective had been living inside the Venezuelan embassy since 10 April in order to prevent the United States and Venezuela's opposition from taking over the facility, following Washington's orders for the mission's diplomats to leave its premises.

Last week, the US authorities forced their way into the embassy and detained all activists who had ignored their threats and remained there.

Activists have been reiterating that by forcing them out of the embassy, where they had stayed at the invitation of the legitimate Venezuelan government, US officials have violated the Vienna Convention on Diplomatic Relations, which rules that diplomatic premises must be protected against any "intrusion, disturbance of the peace, or impairment of its dignity."

US Police BREAK INTO Venezuelan DC Embassy, Arrest Activists at Guaido's Request
Meanwhile, Juan Guaido, who illegally proclaimed himself interim president of Venezuela, called for establishing a "direct relationship" with the Pentagon, following a failed coup attempt in the country, which took place on 30 April.

After Guaido's statement, his representative in Washington Carlos Vecchio met with Pentagon and State Department officials on 20 May. The details of the meeting have not been disclosed.On 23 May Venezuela's president Nicolas Maduro ordered the Armed Forces to prepare to repel a possible US invasion.

Earlier it was reported that last week, Oslo hosted talks between Guaido's envoys and representatives of President Nicolas Maduro in a bid to broker an end to the crisis in the Latin American country.

Some observers noted that Guaido's decision to take part in the talks appeared to be an admission of defeat after he declared himself Venezuela's president and called for a military coup to oust Maduro. The Venezuelan military did not heed Guaido's calls for a coup. Maduro has repeatedly called for a national dialogue with the opposition to resolve the country's political and economic crises peacefully.

Venezuela’s Maduro Orders Military to Prepare to Repel US Invasion
The crisis in Venezuela began when opposition leader Juan Guaido proclaimed himself Venezuela's interim president on 23 January, two weeks after President Nicolas Maduro's inauguration for a second term following elections in May 2018.

The US, Canada, some Latin American and European nations recognized Guaido as the new legitimate leader and supported him in his attempts to oust Maduro from power.

000000
Popular comments
President Trump,If He wants to be Re Elected in 2020 Presidential Election,He should Have a Respect to the Lejitimate Govt of Venezuela,and stop the Bullying and Cow Boy Style Threats of the Legal and Democratically Elected President Maduro,also To Fire the War Criminal Stooges in the White House,Like the Dirty Sneaky Foxes,Bolton,Pampeo,Elliot Abrams and His Son In Law Mr Kushner ,also stop Listening to the Dirty Wolf Natanyahu,s Lies and Fake Intels,,because Attacking Venezuela,s Lejitimate Leader Maduro and assigning the Sneaky Fox,Treason,and Venezuelan People,s Killer ,and Puppet Guidio ,will be the End of Presidency of Mr Trump