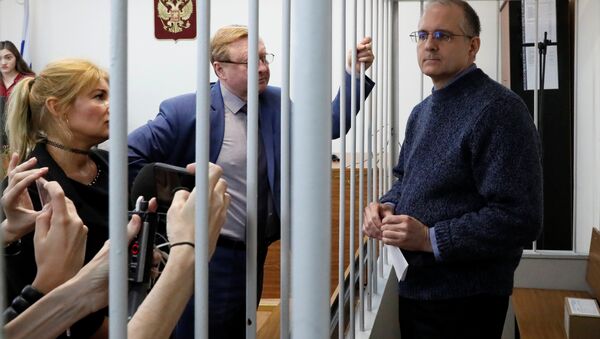 MOSCOW (Sputnik) - US citizen Paul Whelan, who is kept in Russian custody on espionage suspicions, said on 24 May during a hearing in a Moscow court that the investigator, who serves as a captain of the Russian Federal Security Service (FSB), was threatening his life, a Sputnik correspondent reported from the courtroom.

"FSB Captain [Aleksey] Khizhnyak is acting unprofessionally, he humiliates me and threatens my life", Whelan said, through his interpreter.

At the ongoing hearing the court has decides whether to extend Whelan's arrest until 29 August.

Following the court's decision, Embassy spokeswoman Andrea Kalan told RIA Novosti that the US Embassy urges the Russian authorities to immediately allow US consular officials to meet with US citizen Paul Whelan.

"We are requesting the Russian government allow US consular officials to meet with Paul Whelan immediately so that we can speak directly with him about his personal safety and well-being", she said.

Whelan, who is also a citizen of Canada, Ireland and the United Kingdom, was arrested in Russia in December on charges of espionage. Whelan denies the charges and insists he came to Russia to attend a friend’s wedding. In late March, his pretrial detention was extended until 28 May despite his lawyer's request to allow him to defend himself while under a house arrest.

US Diplomats to Visit Spy Suspect Whelan in Moscow Prison on 15 March - Family
Meanwhile, the US embassy voiced concern over it said was Russia's failure to provide evidence of Whelan's guilt.

Russian Foreign Ministry spokeswoman Maria Zakharova has stated that the US embassy was being "hysterical" and the country's law enforcement agencies were working on Whelan's case.

If convicted, Whelan faces up to 20 years in prison. Russian officials have so far not released details with respect to the charges against Whelan.