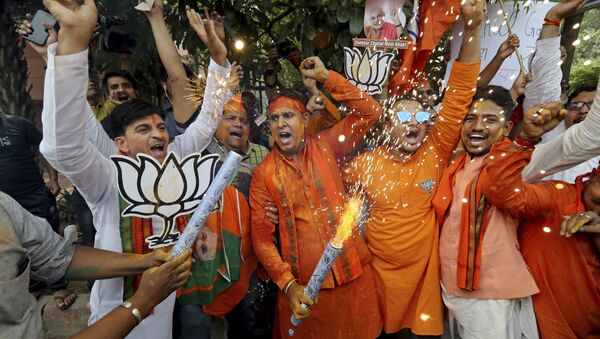 Indian Prime Minister Narendra Modi’s decisive victory in Wednesday’s elections, thumping the opposition Congress Party of Rahul Gandhi and cruising to another five-year term, “drummed up nationalistic fervor,” Dr. Ania Loomba, a professor of literature at the University of Pennsylvania and an expert in postcolonial studies, told Sputnik.

On Thursday, the election ballots were counted, revealing that Modi's Bharatiya Janata Party (BJP) won 274 constituencies in the Lok Sabha, or lower house of parliament, which is just a few over the 272 needed for an absolute majority.

​"This is a victory for the youth who have dreams," Modi, who has served as the 14th prime minister of India since 2014, told a crowd of supporters in New Delhi Thursday night. "For the mother who wished for a toilet. For every sick person who couldn't afford treatment. For farmers who toil hard for the nation. For poor people moving into their first home. For every law-abiding, tax-paying citizen," he added.

According to Loomba, Modi's victory is not necessarily surprising, as the polls before the election predicted his triumph.

"There were a lot of people who doubted these polls, because not only can polls be wrong in a country like India where it's not a two-party system, where regional politics are very complicated and volatile, and there are lots of local alliances. There were many people who did not agree with the predictions. Personally, I saw no reason to disagree because it seemed to be that that was the way the wind was blowing. The victory has been more decisive than we imagined, so in that sense, they have even exceeded what the polls were predicting. It's a moment of reckoning for people in India to recognize what happened," she added.

The BJP campaign focused heavily on nationalistic themes, especially after the fighting in Kashmir intensified in the middle of the election process, according to Smolarek.

India and Pakistan, two nuclear-armed South Asian nations, were involved in major escalation after 40 Indian soldiers were killed in a suicide attack in Jammu and Kashmir's Pulwama district in February. Pakistan-based terror group Jaish-e-Mohammad claimed the responsibility for the attack. The Kashmir conflict is a territorial dispute between India and Pakistan over the Kashmir region, located mostly in the Himalayan mountains, that has been ongoing since the partition of India in 1947.

"I think it [the Kashmir conflict] was a major factor, because they [BJP] played it up. And they played it up very cleverly in such a way that distracted from the economic disaster that the Modi government has been in. When Modi came to power the last time, it was on the mandate of development and economic progress, and most commentators have talked about how he has failed to deliver that and how there has been real distress in the countryside, particularly with farmer suicide, farmers taking to the streets in protest," Loomba explained.

"It [the BJP campaign] drummed up a nationalistic fervor, and remember that is what Modi's entire governance has been based on… on the idea that we [India] will defeat Pakistan. He campaigned on that. That's how he ran his campaign, in fact," she added.

Since 2018, thousands of farmers and workers have flocked to India's capital, New Delhi, to demand farm loan waivers and higher prices for produce, including cereals, oilseeds and milk. Last year, the Congress Party launched a scathing attack on the BJP-led government for failing to work on initiatives to increase farm income.

"India is becoming one of the most, if it isn't already, one of the most polarized places in the world in terms of the rich and the poor. In the countryside, given that farmers have not been able to find [good] prices for their produce, you might have heard that they have been committing suicide in large numbers. To be fair, this was not just in the Modi era, but it started with the globalization of agriculture that started with the previous government. But at least the Congress government did some sort of lip service to poverty, especially to rural poverty," Loomba told Sputnik.

"The [BJP] historically has appealed to traders and middle classes. It never had a strong base among poor people, and now it has managed to turn that by turning to two things: nationalism but not just any kind of nationalism. It's Islamophobic, anti-Christian, very extremely fascistic nationalism which has been selling the idea of a majority population under threat. It seems that this election was run entirely not on the question of economics, not on the question of development, but on the question of nationalism," Loomba noted, also adding that Modi has run a nationalist campaign in support of the Hindu right-wing movement, advocated by right-wing Hindu nationalist volunteer organization Rashtriya Swayamsevak Sangh (RSS) and its affiliate organizations, namely the Hindu Sena and Vishva Hindu Parishad.

"The left has been decimated even in its traditional strongholds. The party left for the most part has made some disastrous choices, they have not been able to run successful campaigns… organizationally, the left is in shambles. However, in terms of the grassroots organizations, I think [they still] have people who are protesting, whether it is farmers or unions," Loomba added, explaining why farmer protests are still common, despite the suppression of the party left.

"I think that Congress made a little bit of a comeback in that they did challenge Modi, particularly Rahul Gandhi. They did not challenge Modi on the right-wing Hindu politics. Instead, Rahul tried to play the soft Hindu card, going to temples, saying, ‘I'm also a Hindu,' and in the end, that leaves you looking weak-kneed. He talked about a minimum wage, and the kind of quasi-socialist slogans that the Congress used to have before before it went into its massive globalization ventures. He did try to revive that. So, Congress may be pretty much finished as a major force, however, there is a way in Indian politics in which the underdog comes back at a very surprising time," Loomba said.

"We used to fear it would become a two-party system like in the US. I fear it will be, at one point, one big national party left," Loomba concluded.