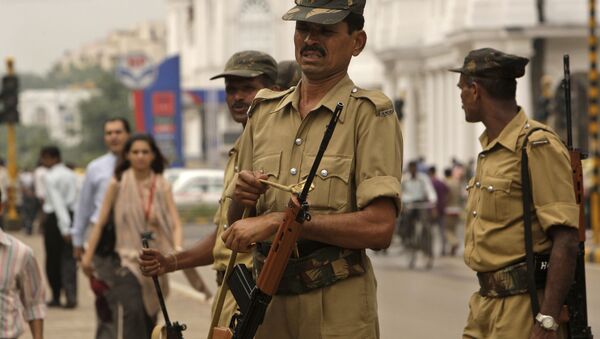 The decision was taken in view of the arrests of Jamaat-ul-Mujahideen (JuM) operatives by the Indian police from different parts of West Bengal in the last few months. Kolkata Police, during interrogations, said that the outfit is active in recruiting cadres for the group in bordering districts of the state.

New Delhi (Sputnik) — India's Ministry of Home Affairs has declared Jamaat-ul-Mujahideen, which operates from Bangladesh, as a terrorist organisation following intelligence input indicating that the unit has plans to set up permanent bases within a 10 km area along the Bangladesh border.

Intelligence reports warned that the terror outfit is in the process of establishing a base close to India's eastern border in West Bengal, Assam, and Tripura states. The outfit has been also planning to spread its network in South India, with an overarching motive to establish a caliphate.

The Indian investigation agency established the involvement of the outfit in two major bomb blasts in 2014 and 2018. Police have arrested over 56 accused belonging to the outfit involved in the blasts and conducting terror activities in Assam and Bangladesh in the last few months.

India and Bangladesh have been sharing closer ties in tackling anti-terror activities under the incumbent government in Dhaka. On 20 May, Bangladeshi Home Minister Asaduzzaman Khan Kamal said that after receiving special intelligence input, security personnel have been taking action to stop potential terror attacks in the country.