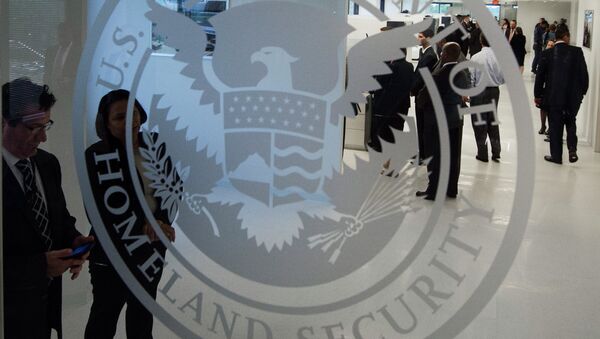 © AFP 2021 / Paul J. Richards
Subscribe
Ten Republican lawmakers have sent a letter to Department of Homeland Security with a number of suggestions on border policy changes as Customs and Border Protection says they are overwhelmed by the recent surge in migration and cannot provide adequate se

A group of Republican lawmakers sent a letter to acting Homeland Security Secretary Kevin McAleenan Thursday outlining a number of border security policies, urging the department to put them into effect.

Ten GOP Representatives urged the agency to "support the president" in his effort to secure the southern border.

"Current projections are that more than 1 million people will have crossed our southern border illegally this year. Our constituents, the American public, are confounded as to why more is not being done by your Department," the letter said.

"Recent DHS statistics on the number of arrivals at our southern border are clear proof that what is currently being done is not enough," the group added.

US Apprehends Record 100,000 Migrants on Mexico Border in April - CBP Data
The lawmakers pointed out that, as of 31 March 2019, more than 360,000 illegal migrants have been taken into custody, a more than 100% increase over the same time of the fiscal year 2018, according to US Border Patrol Chief Carla Provost.

The proposed measures include limiting the Immigration and Customs Enforcement (ICE) parole policy. Before the Trump administration, 90% of detained illegals were granted parole and were released into communities to work and live while their asylum requests were examined. Under Trump, ICE reversed the policy until the US district court ruling demanded they alter their course.

Other proposals included limiting the issuance of work permits only to those migrants whose asylum applications were approved.

The lawmakers also suggested extending the training of CBP agents to conduct so-called fear interviews — a mandatory interview for migrants who express fear of returning back to their home country. Right now, such interviews are performed by United States Citizenship and Immigration Services (USCIS)'s Asylum division. Due to high load, asylum seekers have to wait several days after apprehension before they can be interviewed.

The group also suggested negotiating a third country agreement to allow migrants to be deported to a nation that does not pose a threat to the asylum seekers. This should be done in addition to existing protocols that demand Central American migrants to wait on Mexican territory while their applications are being reviewed.

"As the President continues to show leadership on this issue, we strongly encourage you to exercise the same manner of enthusiasm for fixing this crisis," the letter says.

US Border Patrol Confirms Working With Mexico to Investigate Journalists
On Thursday, Customs and Border Protection deputy commissioner Robert Perez said the border protection is overwhelmed by the influx of migrants and cannot provide adequate service anymore. Perez called on the lawmakers to do their part and assist the agency in any means possible — including the construction of a border wall that will effectively keep migrants, who cross into the US illegally in hundreds, away.

"Unfortunately right now, the facilities that we have, the resources we've been afforded, and the legal framework that we operate under is not sufficient, are absolutely overwhelmed and it's insufficient. And that continues to be an ongoing challenge," Perez said in an interview.

In 2018, the US faced a massive increase of migration from several Central American countries — mostly, Honduras, Guatemala and El Salvador. Thousands of people march across Mexico, seeking to cross the border illegally in groups up to several hundred, putting a strain on CBP. President Trump vowed to build a border wall that will replace existing barriers that are at times designed to keep vehicles away and pose no obstruction to pedestrians. Despite massive resistance from the Democrat-led House, Trump has sought to divert several billion dollars from Pentagon and Treasury Department budgets towards the construction of the wall.