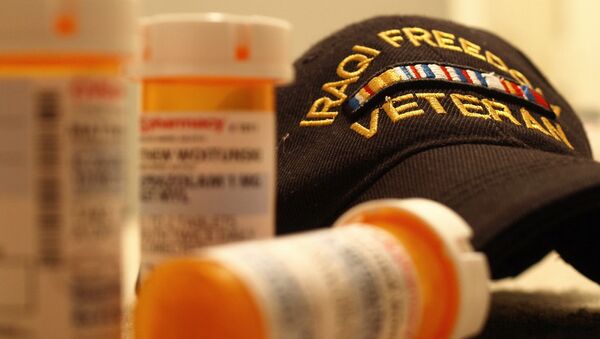 CC BY 3.0 / Matthew Woitunski / Effect of War, Iraqi freedom veteran
Subscribe
Responding to a tweet published by the US Army, former military servicemen and women provided candid accounts of their actual quality of life during and after their service.

Ahead of Memorial Day on May 27, the US Army's Twitter page issued a tweet featuring a young soldier who listed ways the military branch had impacted his life so far. The accompanying hashtags, with phrases such as "#ArmyValues," echoed the positive tone the account was attempting to convey.

Hear from Pfc. Nathan Spencer, a scout with @FightingFirst who shares how the #USArmy has influenced his life.

Though the tweet gained a couple dozen mixed responses, it was not until the account asked the open-ended question that thousands of comments began to flood in.

How has serving impacted you?

Veterans from multiple branches of the US military shared first-hand stories about their own trauma, as well as what they have witnessed others endure following service.

Given me memories of twelve Soldiers who chose suicide, three killed in preventable rollovers, another dozen sexually assaulted, and lots of people and families broken by immoral acts in a war that won’t end.

I've been diagnosed with anxiety, depression and PTSD. I'm almost obsessed with cleaning, I hate crowds, the 4th of July is a nightmare..

I'm physically and mentally wrecked in what should be the prime of my life, and endless bureaucracy does everything to hamper moving on.

It mangled my health and defrauded me my service related claims by "losing" my documents. Though I kept them all, somehow the VA just keeps losing them or rejecting them on account of the Army having no record of ANYTHING I ever did apart from enlist and get honorably discharged.

I carried half of my best friend to the back of a medic humvee after an IED killed him. My brother died after a mortar strike on the way to a funeral for another soldier. I have mangled joints, PTSD, hearing loss, and lupus. I'm also unemployed.

My husband is a paraplegic and can't control 3/4 of his body now.

Me, I've got PTSD, an anxiety disorder, two messed up knees, depression, a bad back, tinnitus, and chronic insomnia.

I wish both of had never served.

Let's see. Lost the functional use of a hand, developed a rare movement disorder and cancer both likely from burn pit exposure, enjoy sleeping 3 to 4 hours most nights due to nightmares and during the day random anxiety attacks all due to PTSD, 7 herniated discs, arthritis..

Chronic, debilitating nerve pain, tinnitis & failing hearing, deep distrust of men in authority but, I get a free tall Starbucks in Nov every year.

Family members also spoke for their loved ones who are living or have lived with trauma, ailments and disabilities brought about in association with service.

I drove 90 MPH across 2 states while on the phone with my brother talking him off a ledge after he returned from Iraq. All he earned was a cheating wife, dead friends, and a OTH discharge after he sought help for his PTSD.

My father's successful military career taught him that he's allowed to use violence to make people do what he wants because America gave him that power.

Didn’t serve but 1 buddy wakes up in the middle of the night screaming. Another has to run a fundraiser every year cause he lost his legs.

My great uncle died a month ago from cancer that was caused by exposure to agent orange. No one from the army even showed up to his funeral. You ruin American lives and throw them to the side.

My mother and father served for 20+ years. I can’t count the injuries they both acquired while serving. The army separated our family. I moved every 1 to 3 years. I now struggle with building and maintaining relationships. I’ve never felt like I’ve had a home.

Not me, but my grandfather died of lung cancer related to agent orange. Guy who served with him in Vietnam got his face messed up. Barely ever went out of the house and had other health complications from war. Neither talked about their experiences. Don't think they wanted to.

In fiscal year 2018, the US Army failed to meet its goal of 80,000 new recruits, falling short by 6,500, according to the Army Times. This downward trend in recruitment came alongside the Trump administration's ban preventing transgender individuals from serving in the armed forces.

The overwhelming response to this tweet shows just how profoundly let down some US veterans feel after their service. The recruitment problems the US military faces may not end anytime soon, if this response is any indication: considering that a large portion of recruits have a family member who served, witnessing a loved one being denied care excluded from veteran programs may guide potential soldiers and sailors away from that career path.

The Trump administration is preparing its Department of Veterans Affairs to roll out its "Mission Act" program on June 6, which looks to expand health care options for the millions of veterans in the US.

In reality, the Mission Act will allow veterans to see a "community provider" only after they have waited at least 20 days for primary or mental health care, according to Military.com.