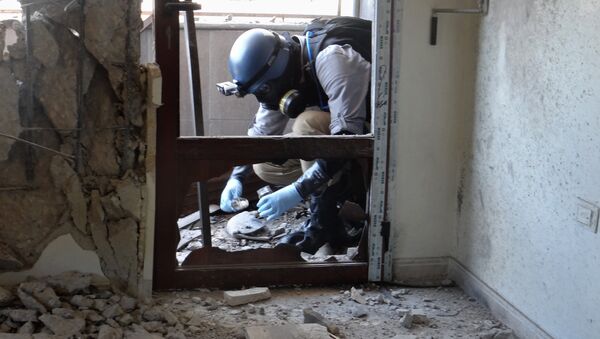 Recent remarks made by the US State Department regarding Syria’s alleged intention to renew its use of chemical weapons show the agency is deliberately ignoring a report from the Organization for the Prohibition of Chemical Weapons that stated last year’s chemical attack in Douma was staged, former UK Ambassador to Syria Peter Ford told Sputnik.

"The May 19 alleged attack in northwest Syria is part of a violent campaign by the Assad regime that violates a ceasefire that has protected several million civilians in the greater Idlib area," the US State Department wrote in its press release Tuesday, referring to recent alleged use of chemical weapons in Syria. The release also adds that "the facts are clear" and that "the Assad regime itself has conducted almost all verified chemical weapons attacks that have taken place in Syria — a conclusion the United Nations has reached over and over again."

​In addition, the US and its allies continue to claim that the Syrian government is responsible for a series of chemical attacks, particularly one in Syria's Douma on April 7, 2018, blatantly ignoring evidence that exonerates Syrian President Bashar al-Assad's regime.

On May 13, the Working Group on Syria, Propaganda and Media unveiled an unpublished report by the OPCW Fact-Finding Mission, saying that the alleged chemical weapons attacks by the Syrian government last year, which were used to justify retaliatory strikes in a Damascus suburb by the US, UK and France shortly thereafter, were in fact staged by Syrian rebels.

The OPCW document reveals that the "dimensions, characteristics and appearance of the [chlorine] cylinders, and the surrounding scene of the incidents, were inconsistent with what would have been expected in the case of either cylinder being delivered from an aircraft."

"In one event a chlorine canister that was damaged on another occasion was placed on the roof with its head inserted into an existing crater hole, and in the other case a damaged chlorine cylinder was placed on a bed supposedly after it penetrated the building roof and bounced from its original trajectory into a bed. In both cases the damage to the chlorine cylinders was incompatible with the damage to the surroundings that was allegedly caused by the cylinder impacts," Theodore Postol, professor of science, technology and international security at the Massachusetts Institute of Technology, told the Institute for Public Accuracy.

"As such, 35 deaths that were originally attributed to these staged chlorine events cannot be explained, and it cannot be ruled out that these people were murdered as part of the staging effort."

The alleged chlorine attack in northwest Syria on May 19 "appears to be… a claim made by a hospital working in an area controlled by the the Al-Qaeda affiliates in Idlib, that some of their guys came in coughing and wheezing and there was a smell of chlorine," Ford told hosts John Kiriakou and Brian Becker on Radio Sputnik's Loud & Clear.

"And the [US] State Department, as it usually does, just took it at face value… that chemical weapons are being used by Syria. Isn't it strange that this happened just when this scandal is erupting? It's been slow-burning news because the mainstream media has been very reluctant to take it up, the story, as we know, that… [OPCW] engineers [discredited] the official narrative that Assad helicopters dropped gas canisters. The engineers completely discredited this, and their report was hushed up. Isn't it odd that these latest claims come through just as this story is beginning to get some leg?" Ford noted.

"It [the recent US press release] very deliberately ignores the hard news about the leak of the OPCW internal report, which effectively concluded that the jihadis fabricated the scene in Douma. This is what the US, Britain and France want to ignore. They want to kick up a sandstorm with fresh allegations and reheat all the incredible allegations to try to distract attention from this bombshell, this absolute bombshell, this hushed up report… They drummed up support for official narrative; they're not going to be the ones to highlight the news that they were all all wrong," Ford said.

Following the US Department of State's press release, the Russia Ministry of Defense accused Syrian rebels operating in the Idlib de-escalation zone of equipping ammunition "for the performance of so called use of chemical weapons against the civilian population by the government troops."

However, despite the leaked OPCW internal report, State Department spokesperson Morgan Ortagus rejected the Russian allegations against the White Helmets and others in a statement, claiming they are "part of a continuing disinformation campaign by the Assad regime and Russia to create the false narrative that others are to blame for chemical weapons attacks that the Assad regime itself is conducting."