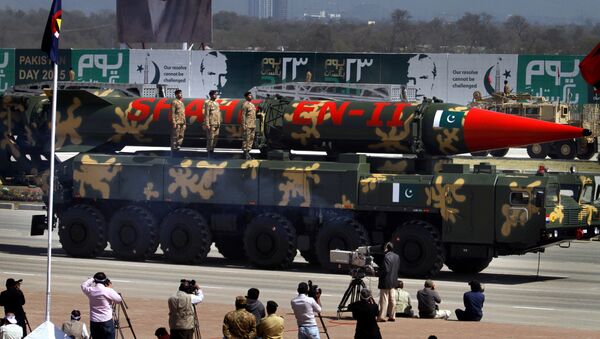 © AP Photo / Anjum Naveed
Subscribe
The test of the nuke capable supersonic missile has been conducted a day after Pakistan's foreign minister held informal interactions with his Indian counterpart, claiming that he proposed a dialogue to resolve all the issues to bring peace to the region.

New Delhi (Sputnik) — Pakistan has successfully conducted a test launch for a surface-to-surface ballistic missile, Shaheen-II, capable of carrying both conventional and nuclear warheads up to a range of 1,500 kilometres, the country's military said on Thursday.

The test launch was conducted a day after the Indian Air Force test fired an air launched version of the BrahMos supersonic cruise missile from its frontline Su-30 MKI fighter aircraft.

The launch had its impact point in the Arabian Sea. Pakistani President Dr Arif Alvi and Prime Minister Imran Khan also extended their congratulations for the achievement.

Shaheen II, two stage solid fuel missile, is a Pakistani version of the Chinese M-18, originally shown at the 1987 Beijing Air Show as a two-stage missile with 1,000 km range carrying a 400-500 kg payload.

Earlier on Wednesday, during first informal interaction with his Indian counterpart Sushma Swaraj on the sidelines of the SCO Council of Foreign Ministers meet in Bishkek, Pakistani Foreign Minister Shah Mehmud Qureshi said Pakistan "wants all the matters resolved through dialogue and that Prime Minister Imran Khan had said in his very first speech that if India takes one step forward, we would take two steps forward".

This is the first meeting between the two since the recent India-Pakistan skirmish.