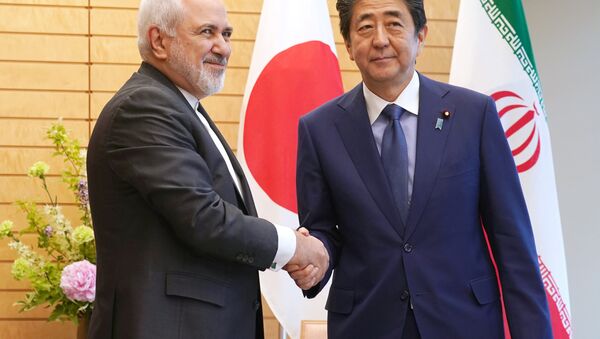 MOSCOW (Sputnik) - Japan does not plan to hold any meetings with the Iranian leadership in the near future amid the heightened tensions between Washington and Tehran, according to a Japanese Foreign Ministry official.

"At the moment, we are not expecting such meetings," the official said, when asked if Tokyo planned meetings with the Iranian leadership in the foreseeable future.

The ministry official also refrained from "making predictions" on whether the issue of US-Iran standoff would be raised during US President Donald Trump's visit to Japan later this week, as previously reported by the Kyodo news agency.

Trump will pay a four-day visit to Japan on Saturday. The US leader is expected to meet with Abe, as well as Emperor Naruhito.

Japan's Panasonic Suspends Transactions With China's Huawei - Reports
The US-Iranian tensions first flared up last year when the United States unilaterally withdrew from the 2015 nuclear agreement with Iran and started reimposing sanctions on Tehran. Iran announced in early May of this year its decision to partially discontinue its obligations under the nuclear agreement.

In addition, the United States has stepped up in recent weeks its military presence in the Middle East in what National Security Advisor John Bolton has called a clear and unmistakable message to the Iranian regime. The United States has recently deployed to the region an aircraft carrier strike group, Patriot missiles, B-52 bombers and F-15 fighters, according to the Pentagon. Iranian Supreme Leader Ayatollah Ali Khamenei has said that Iran does not intend to wage war with the United States but will continue to resist Washington.