Indian Elections 2019: As BJP Heads for Landslide, Twitteratti is on Fire 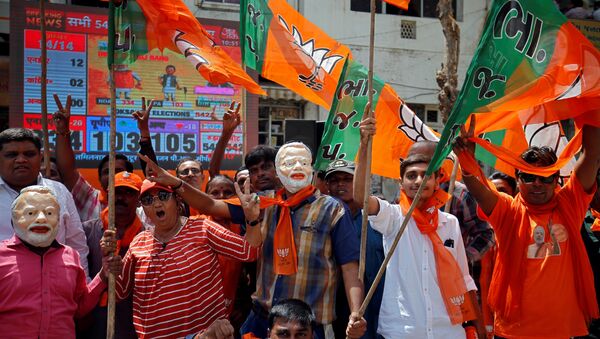 Social media was already full of comments about Indian political parties’ supporters and activists venting their aggressive viewpoints during the over a month-long 2019 Indian Parliamentary Elections. Prime Minister Narendra Modi and his party BJP are known to have a sizeable fan base on social media platforms.

New Delhi (Sputnik) — As the results of the Indian Parliamentary Elections kept coming on Thursday showing the ruling BJP-led NDA alliance winning a clear majority, the Twitterati was abuzz with jubilation and snide remarks.

While the BJP's leaders and supporters were celebrating, the opposition parties' supporters expressed their anguish on social media platforms.

The BJP's leaders were ecstatic with the trends and expressed their happiness on social media.

​This election is incomplete if I don't express my gratitude to each and everyone of you who made this possible.

As the counting trends started to hint towards a major victory by the BJP-led NDA, journalists and party workers started deserting the Congress Party office.

​Some of the BJP's supporters decided to taunt opposition Congress Party chief leader Rahul Gandhi for trailing his BJP rival in his favourite seat Amethi in Uttar Pradesh that he has successfully won multiple times in the past.

​So the exit polls were correct. All that’s left is to congratulate the BJP & NDA for a stellar performance. Credit where credit is due PM Modi Sahib & Mr Amit Shah put together a winning alliance & a very professional campaign. Bring on the next five years.