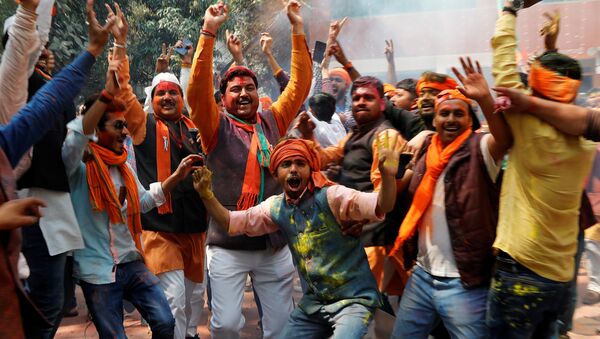 BJP leaders and workers were in celebratory mode, taking to the streets to set off firecrackers. Most of the party activists and supporters were enthusiastically carrying and waving the national tricolour and the BJP's flag. Some were jubilantly beating kettle drums and dancing.

2 hours into counting as trends show a big lead for the ruling BJP, celebrations have already started outside the BJP HQs with party workers drumming and dancing to bollywood music #2019Elections pic.twitter.com/k6N8QGbBFd

​"We have always believed that BJP is a party that works on the principle of good governance. The vision that Prime Minister Narendra Modi envisages of welfare for all is loved by the people of this country. Our hope is vindicated by the counting trends and we can all hope for a thumping victory for the BJP led NDA government", said a BJP leader Santosh Gupta in New Delhi.

​As per the latest trends, the BJP has gone past the half-way mark. The vote count caps a nearly two-month long election process that witnessed high-octane campaigning amid charges of tampering with electronic voting machines (EVMs) and violations of the Model Code of Conduct (MCC).

Counting of votes is also taking place for four state Assemblies — Andhra Pradesh, Odisha, Sikkim, and Arunachal Pradesh, which were conducted along with the general elections.

The seven-phase parliamentary elections commenced on 11 April and concluded on 19 May. Over 8,000 candidates are in the fray for 542 parliamentary seats across the country.

Of the total 543 Parliamentary seats, elections were held in 542 constituencies. The Election Commission had cancelled polls to the Vellore seat in Tamil Nadu on the grounds of excessive use of money power.