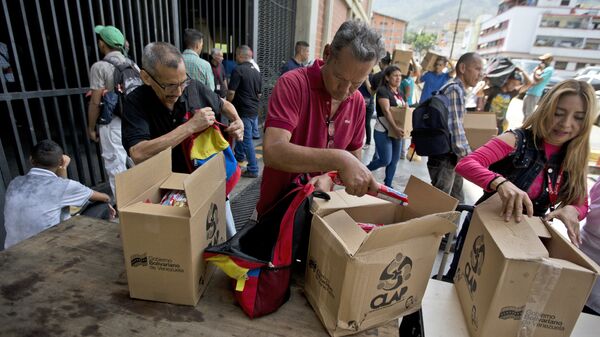 Washington is preparing to target CLAP, the food distribution program that feeds millions of Venezuelans, with sanctions in a further effort to force regime change there. However, a journalist in Caracas told Sputnik that while US sanctions are devastating, Venezuelans see the service as a “social right” they won’t give up easily.

Local Provision and Production Committees (CLAPs) were introduced in early 2016 by Venezuelan President Nicolas Maduro in order to stem the tide of inflation and ensure Venezuelans continued to have access to food. The price of oil, the country's primary export, plunged below $20 a barrel, and the value of the bolivar spiraled downward.

Roughly 6 million families receive a CLAP box at least once a month — a large majority of Venezuela's 30 million people — and are also able to purchase heavily subsidized food at local markets managed by the program. Journalist Max Blumenthal visited one such market in February 2019, noting the cheap prices and plentiful food available — a stark contrast to the heavily repeated myth that Venezuelans are without food and require US-directed aid.

The Wall Street Journal, which broke the story of the sanctions, said the effort would begin in the next three months and claimed that CLAP was a corrupt, money laundering outfit, the curtailing of which would weaken people's loyalty to Maduro.

Almost since its inception, the US has maintained that CLAP exists to buy the loyalty of Venezuelans and that it's used as a political weapon against opposition supporters. However, Lucas Koerner, an activist and writer for VenezuelAnalysis.com, told Radio Sputnik's Loud and Clear that's not how the system works at all, noting that everyone gets access to the same food boxes.

​Koerner explained the CLAP program was "organized on the basis of local committees, which are usually linked to the communal council structure in every neighborhood and often every block," noting his apartment building has its own committee.

"Once a month, for effectively free — I mean it's around 500 bolivares, and a dollar is around 6,000 bolivares, so it's basically free — and you receive a box of rice, lentils, pasta, black beans, cooking oil, etc, and sometimes in other neighborhoods you get it every 15 days. This is a real lifeline," Koerner said, noting that upwards of 60% of Venezuelan households receive CLAP boxes and 15% depend almost exclusively on them.

Koerner said CLAP was being accused of being a money laundering scheme "precisely because it is the most successful social program in Venezuela, distributing food to… the vast majority of the Venezuelan population and not just government supporters, but also opposition supporters. The majority of people in my building are opposition supporters, yet they receive the [CLAP] box regardless. So there is no political discrimination."

US war on #Venezuela reaches its genocidal stage: Sanctions on CLAP food program. CLAP feeds feeds 6 million families (vast majority of its 30M ppl) & the article even notes their dependency as the economic crisis worsens (due to US sanctions). https://t.co/IOcKPPpDLv

​"One of the reasons why the Maduro government remains in power is its ability to continue to provide social programs for the people and allowing them to weather the worst of this crisis that is absolutely being exacerbated by the US sanctions regime, which was really intensified in January, when Washington imposed a de facto oil embargo on the country, which led to a 36% drop in oil exports," Koerner said. He noted this cuts into the government's revenue, and thus its ability to continue funding programs like CLAP.

"One should really ask… what's the political intention in demonizing this incredibly successful social program without any apparent public evidence that has been presented," Koerner told hosts Brian Becker and John Kiriakou. "Clearly, there seems to be an attempt to try to knock down one of the last pillars of the government's support."

Indeed, this has long been the US state's plan of attack. In a July 2018 commentary piece, Moises Rendon, associate director and associate fellow of the Americas Program at the Center for Strategic and International Studies (CSIS), a hawkish Washington think tank closely tied to the military-industrial complex, said in no uncertain terms, "The United States and other like-minded countries must work together to both expose and dismantle the politicized and corrupt CLAP program."

Hawkish think tanks like @CSIS have promoted targeting CLAP for years. US argues CLAP "buys votes" & support and justifies destroying what it admits is a lifeline for millions of people — all for the purpose of putting a gov in power the US likes. https://t.co/bRriQKuWL2 pic.twitter.com/pe2jKt2ecX

​Since January 23, Maduro has faced the open challenge of Juan Guaido, a political neophyte who declared himself interim president and quickly won the backing of the US and several dozen countries committed to forcing regime change in Venezuela. However, three coup attempts by Guaido have fizzled and left him with nothing to show for them. Washington has used the crisis as an excuse to implement drastic and crippling sanctions on the country, seize Venezuela's overseas assets and openly threaten it with military action.

However, three-quarters of the world's countries, and key international bodies like the United Nations and International Monetary Fund, continue to recognize Maduro, who was elected to a second presidential term in May 2018.

However, Koerner said he didn't think attacking CLAP would undermine support for Maduro, since even opposition-supporting Venezuelans "recognize that this is a benefit they are receiving from the government. They consider it a social right and would definitely be opposed to efforts to eliminate that right."

Washington's sanctions have already had a devastating effect on Venezuela's economy: a recent report by the Center for Economic and Policy Research (CEPR) found that 40,000 Venezuelans have died in the last two years as a result of US sanctions. Recent moves to seize Citgo, the US subsidiary of Venezuela's state-owned oil company, PDVSA, are estimated to deprive Caracas of $11 billion this year, Sputnik reported.

A kernel of truth here: the US government says CLAP corrupts free markets, harms US companies and threatens national security. In other words, the Venezuelan government not letting its people starve threatens capitalist hegemony. https://t.co/y82dbqM79i pic.twitter.com/lsUU9VQRqR

​CEPR's report also found an 85% shrinkage in availability of key medicines that endangers over 300,000 people.

"If production doesn't further collapse — which it probably will — if it remains constant, that's $6 billion the Venezuelan government is not going to have," Koerner said, calculating the loss in revenue due to reduced oil production and sales so far this year. "Take into account that the total food and medical imports for 2018 totaled $2 billion. This is having an absolutely drastic impact on the Venezuelan nation and on its people."

"The fact that this is not being reported in the international media is effectively leaving Washington off the hook and basically covering for this, ensuring the impunity" of US actions.

Indeed, Idriss Jazairy, the United Nations special rapporteur on the negative impact of the unilateral coercive measures, blasted US sanctions against Venezuela, Cuba and Iran earlier this month, saying, "The resort by a major power of its dominant position in the international financial arena against its own allies to cause economic hardship to the economy of sovereign states is contrary to international law, and inevitably undermines the human rights of their citizens."

"It is hard to figure out how measures which have the effect of destroying Venezuela's economy, and preventing Venezuelans from sending home money, can be aimed at ‘helping the Venezuelan people,' as claimed by the US Treasury," Jazairy said on May 6 in Geneva, according to the UN Office of the High Commissioner on Human Rights (OHCHR).

However, Koerner told Sputnik that not only is Guaido's movement splitting and becoming "deflated," so are journalists who naively rushed to back the coup.

"Given the failure" of the military coup, Koerner said, "the more moderate, electorally oriented factions of the opposition are gaining the upper hand, apparently, and seem to be leading this effort" to form a dialogue with the government in Norway last week between top opposition and government officials.

"There's a split within the main part of the opposition: the center-right party ‘First Justice,' which is the party of Julio Borges, Guaido's envoy to the Lima Group… came out forcefully opposing the negotiations while Guaido owned them," Koerner said. "Clearly there is a power struggle going on within the opposition; its unity appears to be dissolving," and internal divisions that had been suppressed in the early days of the coup have arisen once more.

"It's very possible the opposition could further fracture, and further negotiations [could occur] with the moderate faction for some kind of ‘packed' transition.. in which they're given some positions, some quotas of power, in return for kind of normalizing the situation."