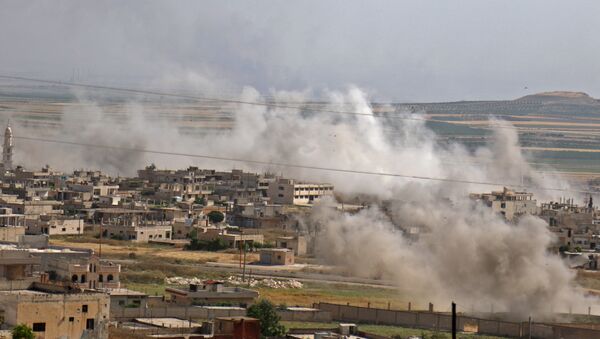 Earlier, the US State Department claimed that it had seen indications that the Syrian army may be using chemical weapons in the country. Both the US and the UK vowed to respond "quickly and appropriately" if it turns out to be accurate.

US Special Envoy for Syria James Jeffrey stated in a speech in House of Representatives Foreign Relations Committee that Washington can so far not confirm the alleged use of chemical weapons in Syria's Idlib province.

"We are watching [the situation] very closely, also the reports of chemical weapons use. So far, we cannot confirm it, but we are watching it", he said.

At the same time, Jeffrey claimed that the Syrian government is still "willing to consider" the possibility of using chemical weapons, allegedly in a bid "to aid ground [infantry] attacks".

The US State Department previously stated that it had seen signs that the Syrian army may be using chemical weapons in the country and reiterated Washington's past threats that it would "respond quickly and appropriately" if allegations turn out to be correct, with the UK echoing this sentiment.

Head of the Russian Centre for Syrian Reconciliation Major General Viktor Kupchishin stated on 21 May that terrorists operating in the Idlib de-escalation zone possess significant amounts of poisonous substances and are planning to use them in staged provocations. Such actions, according to Kupchishin, would be aimed at accusing the Syrian army of "chemical attacks" against civilians.

The Russian Defence Ministry warned on 17 May that the Nusra Front* terror group was preparing to stage a false-flag attack in Idlib, Syria in a bid to frame the Russian Aerospace Forces for attacking civilians using chemical weapons. The group was planning to film the alleged poisoning of civilians beside fragments of Russian munitions to achieve the desired effect, the ministry added.