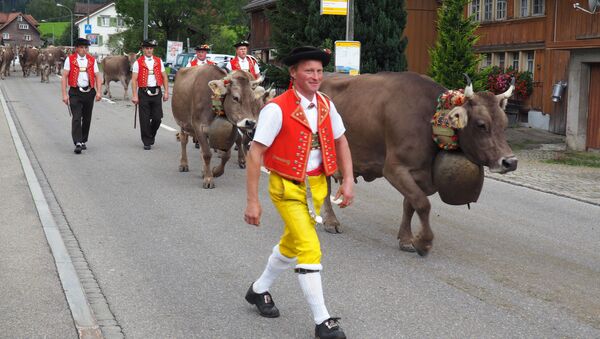 © AP Photo / Christopher Gaffney
Subscribe
International
India
Africa
The citizens of Switzerland has supported the tightening of rules for the sale of guns in the country in accordance with the norms of the European Union.

According to the Sunday referendum's official data, almost 64 percent of the country's residents favored tightening weapons control. In particular, from now on, when buying new weapons — from pistols to rifles — it will be necessary to obtain permission from the regional supervisory authorities. Opponents of the referendum argued that this was the first step towards the disarmament of Switzerland.

Sputnik has discussed the issue with Alexander Frind, Political scientist of the GfS Bern Research Institute.

Sputnik: Where does the controversy lie? What were the differences with other EU countries?

Alexander Frind: Switzerland has a longstanding tradition in sports shooting and mandatory military service requiring soldiers to store ordonnance rifles at home and complete annual shooting exercises. This is unique in European comparison. Gun legislation has also been more liberal than Germany or the Netherlands for example.

New Swiss Gun Law Affects Only Legal Owners, No Safety Benefit: Pundit
Alexander Frind: The amendment of the EU directive required all members of the Schengen-Dublin agreement to adopt national regulations. Early on in the negotiation process with the EU, the Swiss government, however, managed to get exceptions concerning military rifles in private ownership.

Sputnik: The reform won 63.7 percent of the ballot with only canton Ticino rejecting the legal amendment. Why is it so? What is the gun tradition in different areas of Switzerland?

Alexander Frind: In general, competitive shooting is more common in rural areas. Communities with a higher number of shooting clubs were also less in favor of the new gun regulations.

In the canton of Ticino, the No-vote was of political nature. It was an expression of Anti-EU sentiment and disagreement with Swiss-European affairs which is less pronounced in other parts of the country. In addition, the Swiss people's party was joined by the Lega in the canton of Ticino, leading to greater momentum for the No-campaign.

Gun-Loving Switzerland Endorses Tougher EU-Style Arms Controls
In the future, shooters need to prove after 5 and 10 years that they are still actively practicing. Collectors need to follow new requirements for safe storage and provide evidence. If shooters and collectors fail to provide these proofs, guns can be confiscated. The situation for hunters and private ownership of ordonnance rifles remains unchanged.

Alexander Frind: The opponents framed the new regulation as "anti-swiss" and contradictory to the shooting tradition. They also viewed the regulation as disarmament of the citizens and feared excessive bureaucracy.

However, their core messages spoke primarily to their supporters They failed to convince a wider audience with noties to the shooting tradition. Outside of the voter base of the right-wing Swiss people's party, all other parties accepted the new regulation with strong majorities.

Alexander Frind: Switzerland has never experienced incidents like the US, but two shootings lead to heated national debates. The mass shooting at the parliament of the canton of Zug in 2001 lead toincreased security measurements in local parliaments. In 2007, a teenage girl was shot dead in Zurich with a military rifle. After this incident, various organisations launched a popular vote in favor of tighter gun laws and abolishing home storage of ordonnance weapons. This initiative was rejected by a majority of 56 percent in 2011.

Sputnik: Nearly 48 percent of Swiss households own a gun — it is one of the highest rates of private ownership in Europe. How does the country manage to avoide mass shootings?

Alexander Frind: Estimates suggest about 2 million privately owned guns in Switzerland. From a legal perspective, mandatory background checks are in place to make sure only persons with a clean record are allowed to buy a firearm.

In light of the strong shooting tradition (e.g. the Knabenschiessen, one of many youth competitions), responsible and safe use is being taught from an early age. The proponents of the new regulations also expect prevention of firearms misuse due to improved cantonal registers and firearm markings.

2 Killed, One Injured in Cafe Shooting in Switzerland
Sputnik: What consequences and reaction can we expect to see after the law is implemented?

Alexander Frind: The popular vote shows a high level of trust in the Swiss government. Authorities were not only able to negotiate exceptions from the rule, but they also managed to convince the voters of the importance of Schengen-Dublin for security and the Swiss economy.

Proponents argue that the changes will have only minor effects. Opponents expect further gun restrictions in the future and increasing adaption of EU-laws without being a member state.

Views and opinions expressed in this article are those of Alexander Frind and do not necessarily reflect those of Sputnik.