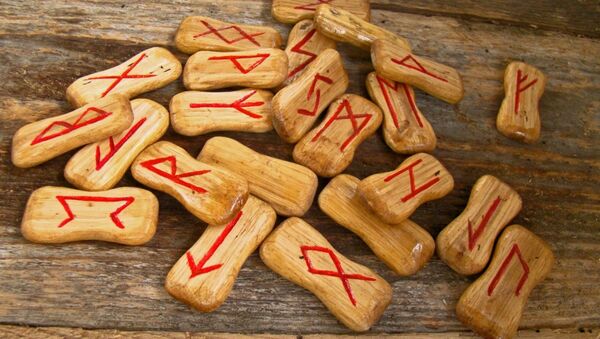 CC0 / /
Subscribe
The government's reported plans to ban the traditional runic alphabet alongside heathen imagery, due to their alleged popularity in Neo-Nazi circles, have sparked the ire of politicians and ordinary Swedes alike.

The government is currently investigating the possibility of banning the use of old Norse runes, the Swedish news outlet Samhällsnytt reported.

The background to the investigation, lobbied by Social Democrat Justice Minister Morgan Johansson, is the Swedish neo-Nazis' alleged predilection with the runic script, despite the fact that it predates the spread of neo-Nazi ideology by a thousand years.

According to the government proposal, ancient Norse symbols, imagery, and traditional jewellery can also be banned as "incitement of ethnic hatred". This applies, among other things, to Thor's Hammer known as Mjölner, the Valknut (or Odin's knot) and the magical stave Vegvisir.

The government's "one cure fits all" approach has enraged neo-pagans, who adhere to the ancient Nordic religion known as Asatru, and history enthusiasts, who believe that Viking culture is an inherent part of Scandinavian heritage.

Banning an entire written language restricts the freedom of religion, which is backed by the Swedish Constitution and international conventions, they argued. Additionally, by adding contrived meaning to the runic script, the government is making the same mistake as the Nazis, who widely utilised Nordic imagery.

"Our attitude is that prejudices and misunderstandings are best cured with knowledge and facts. It is not okay to try and replace the meaning of our symbols with one's own prejudices or political meaning they completely lack. Banning them would wipe out a part of our own history, culture and beliefs — and our freedom of expression because of political interpretations that do not belong in the Asa community", the Swedish Asa Society wrote on its website.

According to them, a culture that is tied with the first settlers' footprints in the North, cannot be destroyed.

In protest against the government's plans, the Asa Society has started a campaign under the motto "Don't touch our runes". The "Battle of Runes" campaign has gathered almost 10,000 signatures.

On Friday, 24 May, a manifestation outside of the House of Parliament will be held.

The government's plans have also come under fire on social media, where Swedes stood up in defence of the rune.

"So, the government wants to ban runic writing. Well, will they destroy the Rök Stone outside Vadstena and several other priceless rune stones from the Viking Age? A more anti-history government is indeed hard to find", a Swede wrote.

"Our government advocates multiculturalism, but we are not entitled to have a culture of our own. What the government is now doing is trying to censor our own cultural heritage and erase our roots. Fifth column", Jeff Ahl of the right-wing party Alternative for Sweden tweeted, pledging to wear Thor's hammer "in a really visible way".

​"What will the idiot government do to anyone who has a rune tattoo on their body? Lifetime labour camp? Penalty tax?" blogger and writer Katerina Janouch tweeted.

The Scandinavian rune script, or Futhark (derived from the first six letters), was widely used across Northern Europe until the end of the Viking age, when it was gradually replaced by the Latin alphabet amid ongoing Christianisation. However, the use of runes for specialised purposes, such as for decoration, persisted until the early 20th century.

Today, runes are still widely used in design. Arguably the most notable example is the Bluetooth logo. It is a combination of two runes, Haglaz and Berkanan, equivalent to the letters "H" and "B", the initials of Harald Bluetooth, a Danish Viking age ruler.

Bluetooth was named after the 10th Scandivavian King Harald I. His runic initials can also be seen in the Bluetooth logo. #FunFactSunday pic.twitter.com/1YwHYAhXWZ

​Interest in Old Norse has grown strongly in recent times, also internationally, partly owing to TV series such as the "Vikings", "The Last Kingdom", and "Game of Thrones".