Mysterious Quakes Worldwide Might Be Linked to Birth of Submarine Volcano 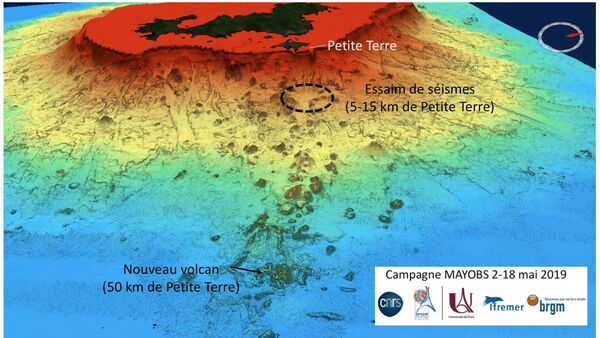 The birth of a unique submarine volcano near a French island located between Africa and Madagascar could shed light on a puzzle that has baffled scientists since last year. In 2018, seismic sensors detected strange low-frequency ripples thousands of kilometres away from the discovered developing volcano.

The baby submarine volcano, situated 50 kilometres away of the tiny French island of Mayotte, might be linked to a series of mysterious earthquakes, the results of a French scientific mission suggested, according to National Geographic.

The mission, coordinated by France's National Centre for Scientific Research (CNRS), was tasked with clarifying the origin of the unexpected seismic activity that has shaken the tropical island, wedged between Africa and Madagascar, since 2018. While the islet has witnessed numerous tremors, ranging from minor rumbles to a 5.8-magnitude quake – the largest to occur in the region in the past year –strange low-frequency ripples have been detected by sensors as far as 17,000 kilometres away from Mayotte. One earthquake enthusiast on Twitter, @matarikipax, noticed the unexpected activity on the US Geological Survey's real-time seismogram, challenging scientists around the world to solve the mystery as he tweeted about his observations in November last year.

According to a statement by the French Geological and Mining Research Bureau, the team discovered a new volcano located 3,500 metres underwater. According to the bureau, the birth of a submarine volcano has been observed for the first time. It is estimated to be 800 metres high and 4-5 kilometres wide, with a 2-kilometre-long plume of volcanic fluids emanating from it. Robin Lacassin from Institut de Physique du Globe de Paris, one of the organisations involved in the mission, shared an acoustic image of the volcano, as well as picture of it on the seafloor.

Another amazing view, in section, of the newly discovered active #volcano 50km offshore #Mayotte
Topography of the volcanic edifice and the rising fluid column above it are clearly imaged. Fluid column is ~2km high but do not reach the surface. pic.twitter.com/YLlCJkIFvp

​Scientists are now processing data they managed to acquire in recent months and trying to assess seismic, volcanic, and tsunami risks. However, authorities, as well as the scientific community, have yet to understand the exceptional geological phenomenon.

However, as National Geographic points out, there is still a lot of work to do, while the research team has declined to comment, saying that they have a lot to discover. The outlet cites volcanologist Ken Rubin from the University of Hawaii, noting that it is still unclear whether the volcano is completely new or just a “new eruption deposit at a pre-existing volcanic structure”.