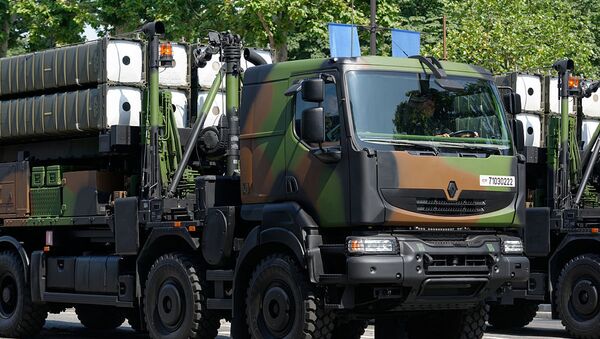 Turkey had long been looking for a supplier of air defence systems and in December 2017, finally set its gaze on Russia’s S-400. However, Ankara's decision stirred the ire of one of its NATO allies - the US.

At the moment, talks are only looking at the deployment of one SAMP/T battery, with the sides currently exploring options for the deployment, Akar said. The minister pointed out that a Spanish Patriot system is already deployed in Incirlik and that an Italian SAMP/T is located in Kahramanmaras.

The announcement comes amid an ongoing spat between the US and Turkey over the latter planning to obtain Russian S-400 air defence systems this summer. Washington insists that the system won't be able to be integrated with the NATO air defence grid and that it poses a threat to the F-35 jets that Turkey has ordered.

The US claims that the Russian systems could gather info on the aircraft's weaknesses and pass it on to Moscow. Turkey, in turn, has proposed creating a joint group to eliminate any risks associated with the use of the S-400 — a proposal that the US turned down — with Ankara also vowing not to integrate the S-400 with other NATO systems. At the same time, Turkey has vehemently rejected abandoning the deal with Moscow.

The US has tried to exercise leverage on Turkey, suspending the delivery of F-35s to the country, threatening Ankara with sanctions and has even mulled excluding the country from NATO.  However, none of this has been able to coerce Turkey into changing its mind, instead only sparking criticism from Turkish politicians.

The SAMP/T is an autonomous air defence system armed with Aster 30 surface-to-air missiles capable of downing both ballistic missiles and enemy aircraft, unlike the Patriots, which are only capable of intercepting missiles.