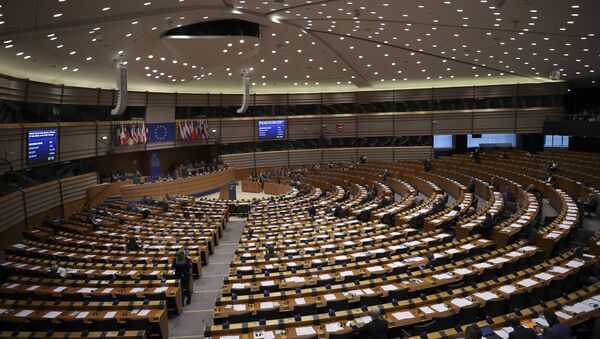 © AP Photo / Francisco Seco
Subscribe
BRUSSELS (Sputnik), Luc Rivet - EU voters will go to polls from Thursday to Sunday to choose members of the European Parliament, but the importance of the election may not seem immediately obvious.

WAY TO LET OFF STEAM

French media refer to the European elections as "le grand defouloir" — the outlet to express oneself without too much impact. Is it so? Not exactly.

In 2014, the turnout at the European Parliament election was at 42.5 percent. In 1979, when the first EU election was held, it reached 63 percent. In the interim, the turnout had been mostly decreasing. It should also be noted that several countries impose compulsory voting. In its absence, the participation figure could be even lower than 42 percent.

At the same time, the turnout at the Spanish general election earlier this year was at 75.8 percent. In Estonia, 63.7 percent of the voters went to polls for a parliamentary election in March.

Pierre Vercauteren, a political sciences professor at UCLouvain university in Belgium, believes that the low turnout average "poses the question of legitimacy of the European institutions."

"Many people don’t understand the process, Europe is considered too distant and is always blamed by their national politicians for what goes wrong or is unpopular. Finally, there is a growing anti-EU populism, which has developed over the last few years across the continent, mainly on the right of the political spectrum but also sometimes, on the left, like with M5S in Italy," Vercauteren told Sputnik.

The EU laws are usually proposed by the European Commission, but they need to be approved by the European Parliament. When adopted, these EU directives have to be integrated by the EU members into their legal systems. These laws then go on to define the everyday lives of EU citizens.

The parliament passes EU laws (directives and regulations) and approves the EU budget, along with the European Council, which comprises the heads of state of each country. The European Parliament also helps to choose the president of the European Commission and select the EU’s civil servants.

The largest political grouping after the election has the strongest mandate to have its choice candidate at the helm of the European Commission.

The electoral system is different in each country, but each has at least a dose of proportional representation, even if it is not the case at a national level.

This enabled the UK Independence Party party to have 21 seats in Strasbourg/Brussels, more than the UK Conservative Party or Labour. However, UKIP had no seats in the UK lower chamber. Similarly, the National Rally of Marine Le Pen was able to have 15 seats in the European Parliament, the second largest French group behind the 20 representatives of The Republicans, but had less success in the French parliament.

The key three systems include closed lists, when citizens vote for parties, who have selected a fixed list of candidates to appear on the ballot paper. In addition, there are open lists, when citizens vote for ‘open lists’ where voters can indicate who is their favorite candidate. This allows voters to change the order of the party lists and influence who is elected first.

Finally, a single transferable vote allows voters to choose as many candidates as they like and number them by preference. The candidate who has passed the threshold to be elected is one of the winners.

The number of seats each country gets its proportional to its population. Germany, the most populous, will get 96 members of the European Parliament for its 82.8 million people, while tiny Malta, with 475,000 people, has just six.

Voters will go to polls to select 751 members of the parliament. However, the situation is complicated by the UK participation in the election. It was supposed to leave the bloc on March 29, and when that did not happen, was given an extension until October 31. After the United Kingdom leaves, 46 seats will be scrapped, while 27 will be reallocated. The United Kingdom may leave earlier if it can pass the withdrawal deal through its parliament, so the UK lawmakers may have only a few weeks or months in the European Parliament.

France and Spain stand to win the most from redistribution, with five new seats for each.

The issues at stake range from spending — although the EU budget is just 1 percent of members’ GDP — to climate change, taxation of the Internet giants and labor rights.

Migration remains a crucial issue, with a number of parties competing for EU Parliament seats well-known for their tough stance on migration policy.

Czech Party: 'Only Way' to Become 'Independent and Free' Again is to Exit EU
There are also minor issues, such as the use of language in the European institutions. Why should English be so dominant if the Brits are out after Brexit? Should French or German replace English as the official language of the bloc? Or should the Eurocrats keep the ‘globish’ version of English as the ‘lingua franca’ best known to all Europeans? The question remains open.

*The views and opinions expressed by the speakers do not necessarily reflect those of Sputnik.