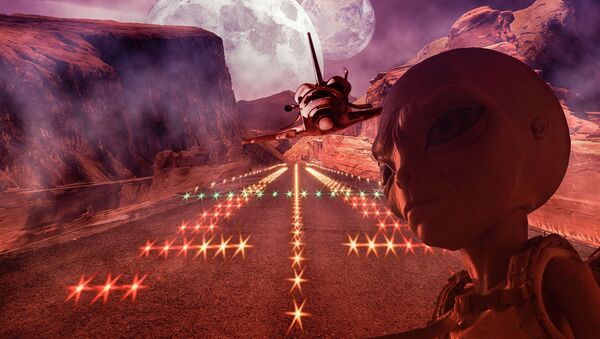 CC0 / /
Subscribe
The gas-shrouded Red Planet has long been associated with undercover state programmes, with multiple experiments reportedly being carried out outside Earth’s atmosphere for security reasons, but the latest one of a kind sighting has nothing to do with any technological or military drills, observers claim.

A UFO has been mapped on the surface of the Red Planet, assumes alien conspiracy theorist Scott Waring. The theorist is referring to an oddly coloured anomaly that has been detected by Google Mars.

“This is a UFO that has crashed into a crater on Mars”, Waring pointed out, depicting the enigmatic blue object as a thick disc spacecraft. It is no less surprising, he said, that no one at Google has even edited it out, going on to express his bewilderment at the “burn and scorch marks” that the object features when the compass is rotated – the “sure signs” of something having “crashed here”.

Waring is meanwhile pinning hopes on an edge to this blue disc finally showing itself one day, enthusiastically suggesting that the unidentified object is a “biologically-grown spaceship” due to its rough edges resembling something organically grown.

The UFO conspiracy theorist argued that aliens could have figured out how to do things quicker than humanity, noting that this is one of the most detailed “living ships” he has ever seen.

Admitting he has seen blue “structures” on the planet Mercury, he noted he had never spotted a blue UFO. He continued to speculate on the extraordinary size of the alleged biological anomaly and how big the scorch marks on its surface are: his photo-editing software led him to conclude that the scorch mark trail measures about 6.25 miles (10 km), while the suspected UFO itself is 1.28 miles across.

However, interpretations about the object’s origins ran wild in the comments, even before Waring voiced any concrete idea, assuming it might be anything from a blue-coloured rock due to a nearby cloud of frozen gas, or, alternatively, a crashed meteorite or an asteroid.

“I could be wrong but to me the blue light area looks like light coming up from a huge hole of an underground base rather than a disc but I’d bet many UFOs go in and out of it. Looks awesome whatever it is”, one astonished viewer commented, while another butted in noting it could be “a traveling object in the Martian atmosphere caught in the satellite picture just at right time.”

“This is so important [sic] photo, mostly a crash site, and probably not so ancient, burn marks can't stand the eternity of time. Good job Scott”, a different user posted, with another one suggesting it might be something “shooting out of the surface of Mars”. He argued that the black scorch marks are possibly “remnants of it.”

Some, however, dismissed the UFO version asserting that it looks more like gas coming out of the planet’s surface, or “a tangent metal explosion from the Blue Energy program” – the project aiming to extract sustainable energy from salty and fresh water bodies.

Meanwhile, praise for the author came in abundance:

“Awesome find Scott, yet again. I wonder how long Google will allow this to be viewed”, one YouTuber stated.

“I believe you found gold man!” another person exclaimed.

000000
Popular comments
Those aliens on mars will pay with sanctions and warmongering when the US finds out. Perhaps Russia can send one of those American aircraft carriers into orbit around Mars with a couple of their stealthy subs loaded with a few nuclear warheads. Good find google, bunch of asswipes.
Rokenbok
22 May 2019, 17:22 GMT
000000
Is that a crash plume or a vent with a wind plume?
SmthForNuth
24 May 2019, 20:24 GMT
000000
Newsfeed
0
New firstOld first
loader
LIVE
Заголовок открываемого материала
Access to the chat has been blocked for violating the rules . You will be able to participate again through:∞. If you do not agree with the blocking, please use the feedback form
The discussion is closed. You can participate in the discussion within 24 hours after the publication of the article.
To participate in the discussion
log in or register
loader
Chats
Заголовок открываемого материала
Worldwide
InternationalEnglishEnglishMundoEspañolSpanish
Europe
DeutschlandDeutschGermanFranceFrançaisFrenchΕλλάδαΕλληνικάGreekItaliaItalianoItalianČeská republikaČeštinaCzechPolskaPolskiPolishСрбиjаСрпскиSerbianLatvijaLatviešuLatvianLietuvaLietuviųLithuanianMoldovaMoldoveneascăMoldavianБеларусьБеларускiBelarusian
Transcaucasia
ԱրմենիաՀայերենArmenianАҧсныАҧсышәалаAbkhazХуссар ИрыстонИронауОssetianსაქართველოქართულიGeorgianAzərbaycanАzərbaycancaAzerbaijani
Middle East
Sputnik عربيArabicArabicTürkiyeTürkçeTurkishSputnik ایرانPersianPersianSputnik افغانستانDariDari
Central Asia
ҚазақстанҚазақ тіліKazakhКыргызстанКыргызчаKyrgyzOʻzbekistonЎзбекчаUzbekТоҷикистонТоҷикӣTajik
East & Southeast Asia
Việt NamTiếng ViệtVietnamese日本日本語Japanese俄罗斯卫星通讯社中文（简体）Chinese (simplified)俄罗斯卫星通讯社中文（繁体）Chinese (traditional)
South America
BrasilPortuguêsPortuguese
NewsfeedBreaking
07:24 GMTMacron: Greece to Buy Rafale Jets, Three Frigates From France in Deal 'Boosting EU's Independence'
06:54 GMTHikers Find Live Nazi Grenade From World War II Near Swedish Ski Resort
06:48 GMTScania Scandal: Swedish Carmaker Investigated for Bribery Over Deal With Indian Minister
06:37 GMT25 Injured After Explosion in Residential Building in Gothenburg, Sweden, Reports Say
06:13 GMTGerman Chancellor Candidates in Focus as Tough Coalition Talks Loom
05:53 GMTBrexit to Blame: Germany's Olaf Scholz Says 'End to Freedom of Movement' Fueled UK Petrol Crisis
05:37 GMTUK Motorist Runs Over 'Knife-Wielding' Man Amid Alleged Petrol Dispute - Video
05:23 GMTPatriarchy Strikes Back? Iceland's Historic Female-Majority Parliament Up in Smoke After Recount
04:43 GMTUS Marine Colonel Put in Brig For ‘Asking for Accountability’ Over US Departure From Afghanistan
04:03 GMTWitness Who Claims She Saw Prince Andrew Dancing With Giuffre at Club to Testify in Court - Report
03:24 GMTBennett Claims He Said 'No Three Times’ to President Biden During Their August Meeting
03:16 GMTRepublicans Slam DHS Chief Mayorkas for Allowing Thousands of Haitians Into US
01:37 GMTUS ‘Humiliated Like Never Before’, Trump Says, After DHS Allowed Thousands of Migrants to Pour in
01:31 GMTLockheed Martin to Build US Army’s Next Generation Tactical Vehicle Based System
01:10 GMTBorder Patrol Agents Disgruntled Over Biden's Attempts to Throw Them 'Under the Bus' - Report
00:53 GMTBeard-Check: Afghan Barbers Banned From Shaving, Trimming Beards - Reports
00:27 GMTR. Kelly Found Guilty: Will Artist Be Removed From Music Services?
00:03 GMTIs Sir Alex Ferguson Right, That Ronaldo, and not Messi, Could Score a Hat-trick for Anyone?
00:00 GMTUS Senator Menendez Urges New Sanctions on Turkey if It Acquires More Russian Weapons
YesterdayInsurgents Who Detained President of Guinea Declare Transitional Charter - Reports