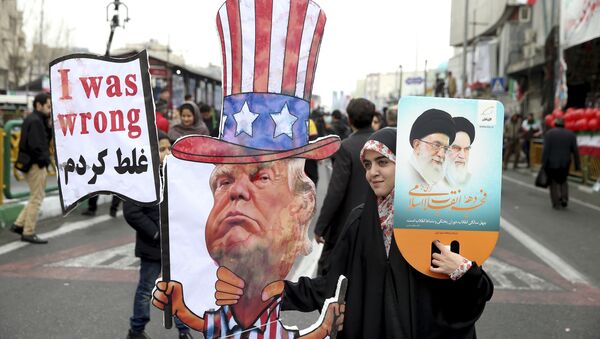 MOSCOW (Sputnik) - Iranian President Hassan Rouhani said that the United States has requested negotiations with Tehran at least eight times, but he added that he did not consider it right in the current situation.

"In my last year's visit to the United Nations, 5 well-known world leaders approached us to mediate a negotiation with the US President. Their [US] State Department also sent requests to us 8 times, but today is not the time for negotiations at all, but resistance and steadfastness", he said in a statement, published by the presidency.

The remark followed a suggestion made by US President Donald Trump that talks are possible, when Iran is ready. He, however, added that any "provocation" would be met with "great force."

Donald Trump earlier warned that if the Islamic Republic "wants to fight", it would be the "official end of Iran". Tehran slammed the threat, with Foreign Minister Zavad Zarif saying that "economic terrorism and genocidal taunts won't 'end Iran'".

US-Iran Tensions: Is a US Attack Through Iraq Possible?
The war of words between the US and Iran has intensified since the Pentagon deployed an aircraft carrier strike group and a bomber task force near Iran in response to what Washington called a potential threat from Tehran.

For its part, Iran slammed the moves, announcing the partial discontinuation of its commitments under the 2015 nuclear deal and giving Europe 60 days to ensure Iran's interests are protected under the agreement.

Tensions have been running high between Tehran and Washington since May 2018 when US President Donald Trump, a long-time critic of the historic Iran nuclear deal, pulled out of the agreement. In less than a year Washington unveiled massive batches of sanctions against the Middle Eastern country, targeting Iran's financial, transport, and military sectors.