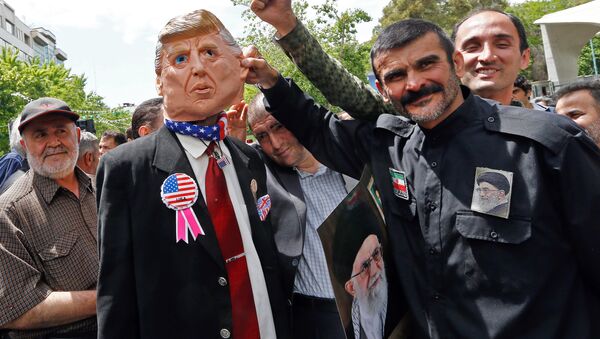 MOSCOW (Sputnik) - Iran's strategy to confront US hostile measures is based on a "no to war, no to sanctions" principle, Iranian President Hassan Rouhani's cultural adviser, Hesameddin Ashena, told Tasnim News Agency on Tuesday.

"Firstly, we would not allow a war to take place in the region, and secondly, we will not brook remaining under sanctions… Our response to the United States is no to war and no to sanctions", Ashena said.

The comment comes in pursuit of a statement issued earlier in the day by Iranian President Hassan Rouhani, saying that the United States had requested negotiations with Tehran at least eight times. Rouhani added, however, that he did not consider the talks right in the current situation.

US Media REVEALS Trump's Strategy 'Playbook' Amid Escalation With Iran
The note was issued hours after US President Donald Trump told reporters that there were no signs Iran was preparing actions against US interests in the Middle East, adding that any provocation by Tehran would be met "with great force". Nevertheless, the US president noted that he was willing to have talks with Tehran when the latter is "ready."

In recent weeks, the United States has stepped up its military presence in the Middle East in what National Security Advisor John Bolton has called a "clear and unmistakable message" to Tehran. The United States has recently deployed an aircraft carrier strike group, Patriot missiles, B-52 bombers and F-15 fighters to the region, according to the Pentagon.

Responding to the US actions, Iranian Supreme Leader Ayatollah Ali Khamenei said that Tehran would continue to resist Washington but that there would be no war.

US-Iranian tensions initially flared up last year when the United States unilaterally withdrew from the 2015 Iran nuclear deal and started reinstating sanctions against Tehran. On May 8, Iran announced its own decision to partially discontinue its obligations under the nuclear agreement.