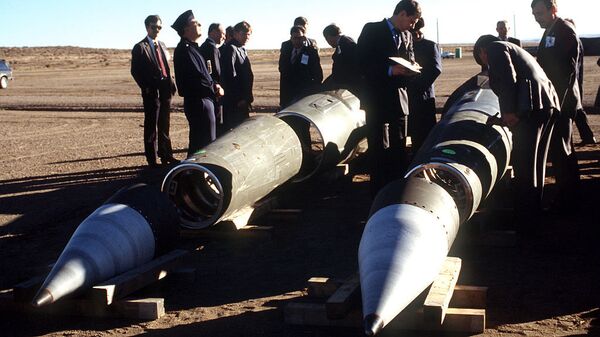 VIENNA (Sputnik) - The Russian-US Intermediate-Range Nuclear Forces Treaty (INF) will be terminated on August 2, the deadline for Washington's announced withdrawal, since Russia is unable to save the treaty after US unilateral withdrawal, Russia's Permanent Representative to International Organizations in Vienna Mikhail Ulyanov said on Tuesday.

"On August 2 of this year, after US unilateral withdrawal from the INF Treaty, this treaty will be terminated. I would like to stress that Russia is not going to withdraw but we cannot maintain this treaty by ourselves", Ulyanov said at a European conference of the international Valdai Discussion Club in Vienna.

US Signed Over $1 Billion in Missile Contracts Since INF Treaty Withdrawal
He stressed that the international system of arms control was currently in a regrettable state.

In October, US President Donald Trump announced his country’s intention to withdraw from the INF Treaty over Russia's alleged violations of the agreement. Moscow has refuted the accusations, claiming that Washington itself is breaching the terms of the deal.

On February 2, the United States formally suspended its obligations under the INF Treaty and triggered the six-month withdrawal process. Washington has said it would terminate this procedure if Russia agreed to be compliant with the pact.

Moscow has also suspended its participation in the treaty, with Russian President Vladimir Putin having instructed the country's authorities not to initiate any new talks with Washington on the matter. However, Putin has stressed that all of Russia's earlier proposals remain on the table.