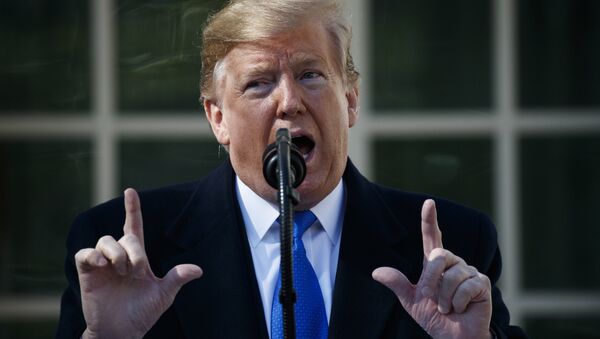 © AP Photo / Evan Vucci
Subscribe
International
India
Africa
WASHINGTON (Sputnik) - US President Donald Trump said Monday that he disagreed with a federal judge's ruling on the disclosure of his financial records, promising that the decision would be appealed.

A US federal judge earlier rejected an effort by Trump to block the House of Representatives Oversight Committee from obtaining the latter's financial records from the accounting firm Mazars USA, LLP.

"It is not for the court to question whether the [Oversight] Committee’s actions are truly motivated by political considerations", the court document, released Monday, stated. "Accordingly, the court will enter judgment in favor of the Oversight Committee".

The judge said that the court would deny Trump's request for a stay pending an appeal.

Lawyers for Trump and his company had argued that the House Oversight Committee's demand for financial records from his accounting firm exceeded Congress's constitutional limits, according to Reuters.

Trump Tax Returns Reveal Over $1Bln in Losses - Report
US Congressman Elijah Cummings earlier issued a subpoena to Mazars USA to obtain Trump's private financial records as a means of learning whether he committed illegal activity before becoming the US president.

Cummings said concerns were raised when Trump's former attorney, Michael Cohen, testified before the Judiciary Committee alleging that the president had altered the estimated value of his assets and liabilities in his financial statement.

Last year, Cohen was sentenced to three years in prison for lying to Congress, as well as fraud, tax evasion and making unlawful campaign contributions, including 'hush money' payments to women who sued Trump to be released from non-disclosure agreements they claimed they had been forced to sign.