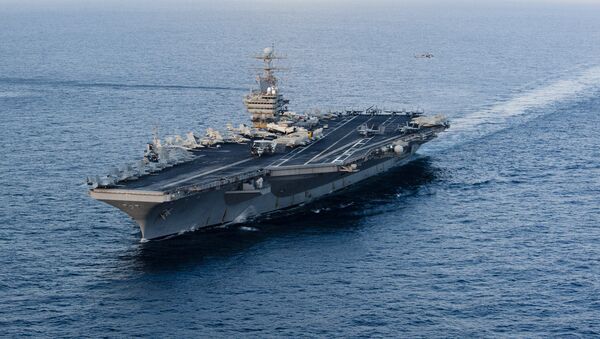 "After the ABECSG deployed to the region in response to credible threat indicators, the operations highlight the ability of the US Navy to quickly mobilize assets and aggregate different platforms with a variety of operational capabilities", the release stated.

During the exercises over the weekend, Harrier jump jets from the Kearsarge engaged in mock dog fights with F/A-18 Super Hornet jets from the Abraham Lincoln aircraft carrier posing as enemy fighters, the release said.

READ MORE: Airlines Say No Changes as US Warn of Risk Being Misidentified over Persian Gulf

Attack helicopters from the Kearsarge also conducted a combined close air support exercise with multiple types of tactical aircraft — systems that do not normally operate together, the release said. Marines also practiced fast-roping to board enemy ships, according to the release.

Tehran Increases Uranium Enrichment Fourfold Amid Iran Deal Suspension – Report
While the release did not mention Iran by name, the weekend exercises clearly represented a show of force directed at Tehran.

In early May, the US announced a military buildup in the Persian Gulf region, which included the Abraham Lincoln Carrier Strike Group and a squad of B-52 bombers, in response to intelligence that Iran was planning attacks on US targets.

Iranian Supreme Leader Ayatollah Ali Khamenei has said that Iran did not intend to wage war with the United States, but would continue to resist Washington. US Secretary of State Mike Pompeo has also stressed the undesirability of the war with Iran, while noting that if US national interests were in danger, Washington would respond "accordingly".

President Donald Trump told reporters on Monday that there are no signs Iran is preparing actions against US interests in the Middle East, adding that any provocation by Tehran will be met "with great force".