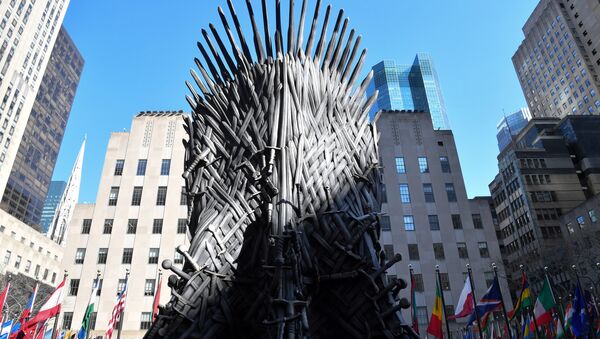 © AFP 2023 / Angela Weiss
Subscribe
International
India
Africa
MOSCOW (Sputnik) – The final episode of the Game of Thrones series, called the The Iron Throne, was watched by 19.3 million US citizens, which is a record both for the project and for all HBO series.

According to the Hollywood Reporter media outlet, the previous record was set by the previous episode, called The Bells, which was watched by 18.4 million viewers.

Game of Thrones is available in over 150 countries worldwide. However, HBO said earlier viewing data is not easily retrieved in many of those markets, making a global figure impossible to calculate.

Viral
A Song of Starbucks and Bottles: Fans Spot NEW BLOOPER in Game of Thrones Finale
The final season of the fantasy saga faced sharp criticism among its fans, with over 1.2 million people having signed an online petition, asking HBO to remake the last season 8 "with competent writers".

The Game of Thrones, based on "A Song of Ice and Fire" series of fantasy novels by George Martin, focuses on the deep political crisis on the conflict-mired Westeros continent, which erupted after the fall of the Targaryen dynasty that previously ruled there for centuries.

HBO has reportedly ordered a prequel. It will be set thousands of years before the events of Game of Thrones, according to various media reports.