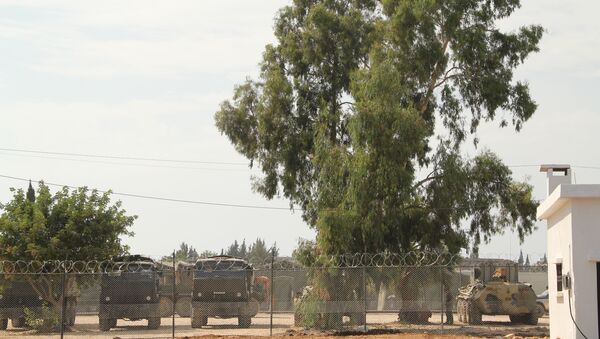 © Sputnik / Dmitry Vinogradov
Subscribe
International
India
Africa
The day before, the Russian Centre for Reconciliation in Syria reported that militants had violated the ceasefire regime in Idlib de-escalation zone 13 times in one day, injuring 3 Syrian servicemen.

The Russian Defence Ministry said Monday that al-Nusra Front terrorists fired six missiles at Russia's Hmeymim base in Syria on May 19. The ministry added that no casualties, nor damage had been registered following the attack.

"Despite the fact that the armed forces of the Syrian Arab Republic ensured full ceasefire starting midnight, May 18, Nusra terrorists continued provocations and shelling in the Idlib de-escalation zone. Thus, in the evening of May 19, 2019, Nusra terrorists made an attempt to attack Russian Khmeimim air base using multiple launch rocket systems… At around 8 p.m. on Sunday [17:00 GMT], terrorists fired six missiles from the Idlib de-escalation zone at the Russian Khmeimim air base in Syria. The air defense forces of the base on duty destroyed all the projectiles," the statement read.

The statements come day after the Russian Centre for Reconciliation in Syria said that the Syrian Army unilaterally ceased fire in Idlib starting from May 18.

Previously, the head of Russia's Reconciliation Centre in Syria said that militant groups acting in the Idlib de-escalation zone haven't ceased their attempts to attack Russia's Hmeymim base and Syrian government troops, adding that the terrorists attempted to shell Hmeymim airbase using multiple-launch rocket systems as well as drones twelve times over the past month.