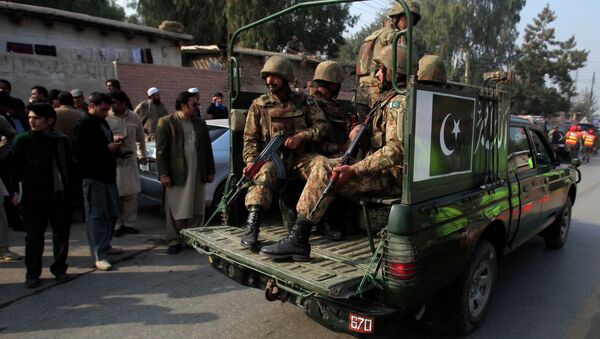 The China-Pakistan Economic Corridor (CPEC) is set to become a crucial leg of the broader Belt and Road Initiative, Beijing's mega-project aiming to enhance "all-around connectivity through infrastructure construction".

Talking to the Chinese media, Ghafoor stressed that one division-size force had already been deployed to protect the $50 billion China-Pakistan Economic Corridor project.

Speaking about the terrorist threat his country was facing, the spokesman stated that the security situation in Balochistan had improved since the launch of the CPEC.

“Today’s Gwadar is not what it used to be two years ago, and in the future it will be on a par with the ports of developed countries.”

“Although there are a few sporadic terrorist incidents, investors should not be discouraged by them and keep their trust intact in peace,” he emphasised.

Pakistan Redeploys F-16 Warplanes After ‘its Failure to Counter India’ – Report
In March, China also deployed its contingent in the Pakistani province of Sindh, which is about 90 kilometres away from Pakistan's international border with India.

The China-Pakistan Economic Corridor is a collection of infrastructure projects that are being constructed in Pakistan. Originally it was valued at $46 billion, but as of 2017 it was estimated to have cost $62 billion.

Since the start of the corridor construction over five years ago, the number of projects at the first stage has grown to reach 22, as a result of which tens of thousands of jobs for local residents have been created, and 8.6 million households have been provided with electricity, according to media reports.