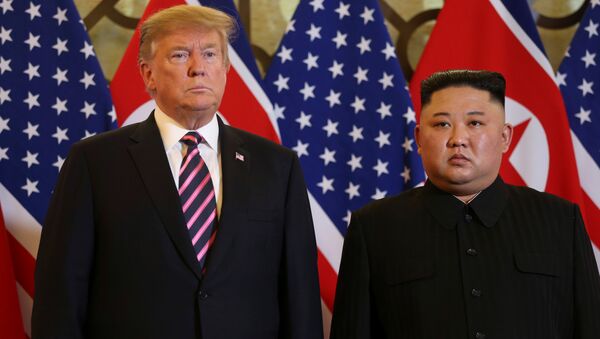 © REUTERS / Leah Millis
Subscribe
International
India
Africa
North Korean leader Kim Jong Un was reportedly nervous about not being able to speak English well with US President Donald Trump during the historic meeting between the two on June 12, 2018, in Singapore, a former aide to South Korean President Moon Jae In recently divulged to the Korean Kyunghyang daily newspaper.

"I am worrying about my lack of English proficiency," Kim is quoted as telling Moon during an April 27, 2018, summit between those two leaders in the village of Panmunjom, just north of the de facto border between North and South Korea, Tak Hyun Min confirmed to the outlet.

"I can speak German well," the North Korean leader reportedly told Moon at the time.

The Moon-Kim summit came after the thaw in relations that took place on the Korean Peninsula leading up to the 2018 Pyeongchang Winter Olympics, in which North Korea agreed to participate in the games with its southern neighbor as a unified Korea.

According to Tak, Moon said that he had a "friendly" conversation with Kim in Panmunjom.

In addition, Tak told the outlet that Kim and his South Korean counterpart's visit to Mount Paektu on the Chinese border in September 2018, which is traditionally considered the ancestral place of origin of the Korean nation, was not a surprise event, as had been previously speculated.

"We [South Korea] had asked for it, but the North didn't confirm it until the day before," Tak said.

This symbolic act of North-South unity on Mount Paektu was the first visit by a president of South Korea to Pyongyang in nearly 11 years.