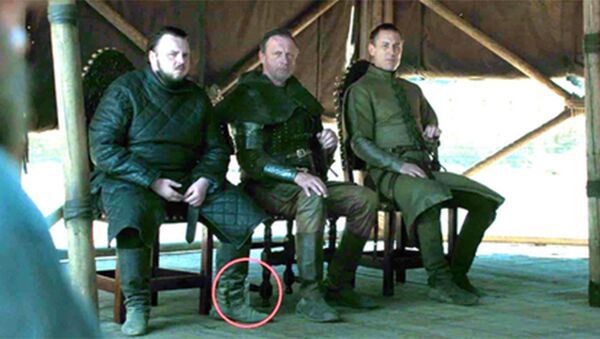 The show’s latest and final gaffe evoked a mixed response from viewers, ranging from disappointment with the last season’s quality to simple amusement.

The much-anticipated final episode of HBO’s Game of Thrones saga, which is famous for its unexpected plot twists, has apparently managed to surprise viewers with one final twist few would’ve expected in a medieval fantasy setting.

A number of keen-eyed members of the show’s audience spotted several plastic water bottles in the scene featuring a meeting between the show’s key characters.

Water bottles are now part of GoT pic.twitter.com/HQtSxdcc6y

It's not just there, I actually found the second water bottle next to Ser Davos. #GameOfThrones pic.twitter.com/rZHqiWmDU4

​This discovery did little to lift the spirits of those of the show’s fans who seemed disappointed with how the series ended.

#GameOfThrones #GoT
As if the writing wasn't bad…Now water bottles.
"best series finale ever" pic.twitter.com/64BDybpR05

Proof that the quality of this show has gone down. First Starbucks, now a water bottle. Worst ending for the best show. #GoT #DemThrones pic.twitter.com/h64CEP8eER

Although they probably put it there to give people a reason the ONLY reason to rewatch the episode #gotfinalesucks #GameofThrones #GOTFinale pic.twitter.com/XVheQXaks5

Anyone defending this final season can’t deny it’s the laziest and most rushed of them all. In more ways than one. Clearly.

​Some also speculated that this blooper, just like the one before involving a Starbucks cup, might be part of a marketing strategy.

If you think they showed Starbucks and this water bottle by mistake, you are naive friends. Marketing strategies nothing more

​And others just use this opportunity to have a good laugh.

Sam had a time machine & traveled to the future, discovered the democracy and came back with a bottle of water #gameofthrones #got pic.twitter.com/3sUD8nF8uk

​The eighth and final season of Game of Thrones series gained somewhat of a notoriety among viewers due to a number of gaffes and bloopers spotted by keen-eyed viewers.

READ MORE: To Get Starbucks? Game of Thrones Fans Think Jaime Lannister Grew His Hand Back

For example, in Episode Five, Jaime Lannister can be seen embracing his sister Cercei with both of his hands, despite the fact that his character had his right hand chopped off several seasons ago.

And in Episode Four, a Starbucks cup can be seen sitting on a table right in front of Daenerys Targaryen as characters celebrate their victory over White Walkers in Castle Winterfell.