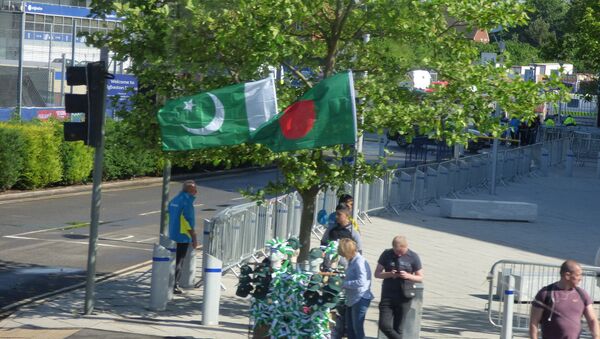 CC BY-SA 2.0 / Elliott Brown / Pakistan and Bangladesh flags and merchandise
Subscribe
Bilateral relations between the two countries have been on a slide since 2013 when Bangladesh decided to hang several war criminals.

New Delhi (Sputnik): Bangladesh has halted visa issuance to Pakistani nationals amid rising diplomatic tensions between the two south Asian nations; diplomatic sources told Sputnik news agency on Monday. Sources added that since last Monday, the visa section has been closed due to a delay in the renewal of the visa of a diplomat from Bangladesh in Islamabad.

It's believed that Pakistan has delayed the renewal of the visa after Dhaka refused to accept the nomination of the new high commissioner of Pakistan to Bangladesh for over a year.

Pakistan's Foreign Ministry sent the proposed nomination of its proposed envoy Saqlain Syedah to Bangladesh in March 2018. Bangladesh has yet to respond to the appointment, according to according a report in The Daily Star.

Two Suspected Rohingya Refugee Traffickers Killed in Bangladesh - Reports
Last year, the Bangladesh tribunal ruled for the death sentence for five war criminals charged with committing crimes against humanity and siding with Pakistani troops carrying out genocide during the Liberation War in 1971.

Pakistan's parliament has issued condemnations and passed resolutions against the hanging of these war criminals on several occasions, Bangladesh considers this an interference in its internal affairs.

The war crime tribunal was established in 2010 to prosecute criminals who assisted the Pakistani army in suppressing the struggle for independence in Bangladesh.

In 1971, a civil war broke out in Pakistan, leading to its division, after West Pakistan launched a military operation in East Pakistan seeking independence. The death toll among Bangladeshi people at the time was estimated to be nearly three million lives.