Analyst REVEALS Who Could Benefit From Austrian Vice-Chancellor Video Scandal 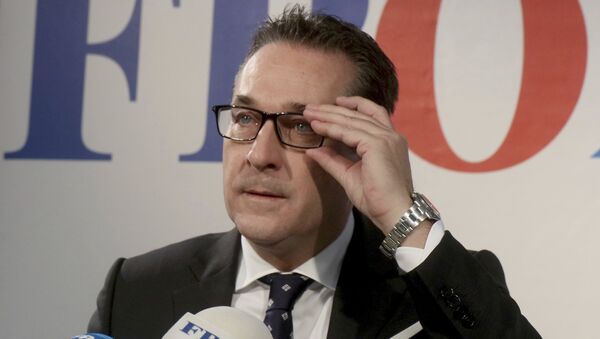 The remarks come as Austrian prosecutors look into the video released by media outlets claiming that the country’s vice-chancellor allegedly discussed the possibility of getting help in elections with a purported Russian woman in 2017; this has already sparked a political crisis in Austria where early elections may be held in the near future.

Austrian Chancellor Sebastian Kurz told reporters on Sunday that it is necessary to find out who ordered the video showing former Vice Chancellor Heinz-Christian Strache allegedly discussing a possible acquisition of the Kronen Zeitung newspaper with a purportedly Russian woman.

The news has already provoked a public uproar in Austria with the country’s President Alexander Van der Bellen describing the video that led to the resignation of Vice-Chancellor Heinz-Christian Strache and broke the ruling coalition as “shameful”.

British political analyst Marcus Godwyn noted that “the timing of this release and the nature of the media outlets who released it prompts the age old essential question in all such cases: ‘Cuo Bona’: who benefits?”

Godwyn warned that this shouldn't be portrayed as “an Austrian Russiagate scandal” given that “nobody is trying to claim that Russia ‘meddled’ in the Austrian elections which occurred a few months after the video was filmed”.

According to him, “it is clear that Austrian Russiagate is not the main purpose of this sting operation”.

The analyst suggested that the matter should be seen in context of the Austrian government recently commenting that it should strengthen ties and cooperation with the Visegrad Group, which consists of Hungary, Poland, the Czech Republic and Slovakia.

“All these countries have opposed the recent massive wave of undocumented non-European, non-Christian immigrants forced on them by the EU and the EU's stated drive to lessen the power of nation states to the benefit of centralised power in Brussels.  This has inflamed the ire of many EU centrist barons as much as their allies across the Atlantic”, Godwyn pointed out.

He referred to “EU central planners” who he claimed are unwilling to see “any strengthening of subgroups within the EU and especially those who oppose the EU strategy towards an EU super state or who dream of freeing their countries from the shackles of the anti-Russian sanctions and other negative consequences of the US, NATO, EU virtual (for the moment) war on Russia”.

So it is safe to assume that it is “these groups who benefit from the sabotaging of this particular Austrian government”, according to Godwyn.

Separately, he mentioned what he described as “relatively inexperienced Austrian politicians about whom I personally knew next to nothing until today and who clearly fell easily into a classic sting operation.”

“How it will play out and what the entire video will reveal remains to be seen but none should ever underestimate the power and cunning of those who seek world domination”, Godwyn concluded.

The remarks come after Austrian President Alexander Van der Bellen called for snap parliamentary elections to be held in the beginning of September. The statement was made following his meeting with Austrian Chancellor Sebastian Kurz.

Austria to Extend Border Controls With Hungary, Slovenia for 6 Months - Minister
Earlier, Austrian media cited Kurz as saying that the he does not plan to remain in a coalition with the Freedom Party of Austria (FPO) after the video scandal involving former Austrian Vice-Chancellor and FPO leader Heinz-Christian Strache, who announced his resignation due to the video scandal.

On Friday, two German media outlets, Der Spiegel and Suddeutsche Zeitung, reported, citing a video recording they obtained, that in 2017, Strache held talks on the possible acquisition of the Kronen Zeitung newspaper by an alleged niece of a Russian oligarch; a move was allegedly made to secure help in the legislative elections.

Strache claimed during a Saturday press conference it was presumably a Latvian EU citizen who approached him and FPO Deputy Chairman Johann Gudenus back in 2017, saying that she wanted to buy the hunting lands of the Gudenus family. He stressed that no one in the party had ever seen this woman again and the party had never received any contributions from her.

The views and opinions expressed by Marcus Godwyn are those of the analyst and do not necessarily reflect those of Sputnik.