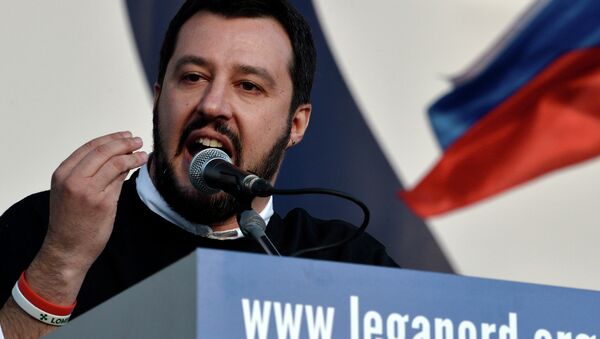 "We have to wait for the elections but I am sure we can be for the first time even the third biggest political group in the parliament. We are already more than 10 parties, and we want to work together," Geert Wilders said.

Salvini is holding a major rally in Milan on Saturday ahead of the approaching EU elections, set for the next week. He is joined by 11 European parties' representatives with Wilders, French National Rally's leader Marine Le Pen and German Alternative for Germany's (AfD) co-leader Jorg Meuthen among them.

The event is also attended by other members of the alliance: Bulgarian Will party, Slovak We Are Family party, Czech Freedom and Direct Democracy party, Estonian Conservative People's Party of Estonia, Belgian Flemish Interest party, Danish People's Party, the Finns Party, and Freedom Party of Austria.

Italian Journo Outlines Reasons Behind Salvini's Rise as EU's Right-Wing Leader
According to the latest Politico projection, Salvini's alliance may gain 70 seats in the European Parliament and hence become the fourth largest group in the body. On 14 May, Europe Elects portal assumed that the alliance might get even 82 seats.

Salvini's pan-European alliance was launched in April and is called the European Alliance of People and Nations (EAPN).