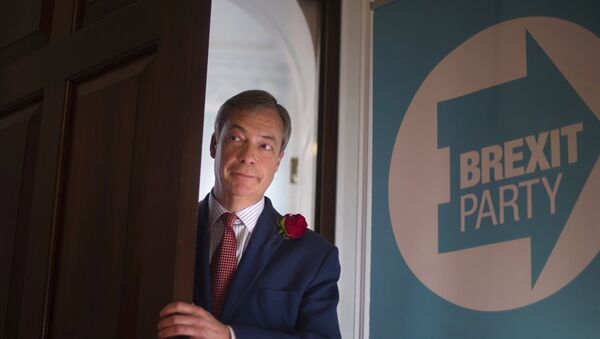 Jon Gaunt
All materials
What is it with lefty woolly liberals like the Guardian and Channel 4 News and their obsession with what other people earn? Did you see the astonishing doorstepping of Nigel Farage by Matt Frei? Frei was questioning him about the money Nigel received from his mate Aaron Banks?

It was the non-story of the year and of course the Guardian have weighed in too. Do you think these snowflakes could possibly be worried that Nigel Farage and his Brexit party are becoming a threat to their Common Purpose world order? Never!

The Guardian breathlessly reported that Nigel Farage "was lavishly funded by Arron Banks in the year after the Brexit referendum, Channel 4 News has alleged, with the insurance tycoon providing him with a furnished Chelsea home, a car and driver, and money to promote him in America."

They fail to report of course that none of this is illegal!

Matt Frei, the reporter, who challenged Farage also fails to mention that he is probably on a six-figure salary and of course would have been paid nice amounts when he was at the BBC and no doubt picks up a good wedge for presenting his dreadful show on LBC each week. Instead of asking questions about Farage's cash he should be begging Nigel to show him how to do phone-in radio!

But this is such a non-story. Politicians and public figures have been funded and received patronage for time immemorial. What is their problem?

After the Brexit victory, Farage was big news in the USA and after resigning as leader of UKIP who can blame him for wanting to cash in on his fame in the States.

Poll Result: GIVE US BREXIT!
The Party that they refer to that cost £108 thousand pounds in Washington DC was brilliant. I know because I was there and so was Jon Sopel from the BBC, Iain Dale from LBC and a load of other mainstream names and we were all drinking free champagne weren't we boys and girls!?

Of course, the real agenda is that they are trying to illustrate that Nigel is not a man of the people? Whatever that hackneyed phrase means? They don't stop to think, for one moment, that the millions who are now supporting Nigel have never felt he was ‘the man of the people.'

We all know he is an ex-city trader, that he went to public school and that he earned a fortune in the EU (just as other MEPS do) and we don't give a fig.

READ MORE: Operation Smear: Self-Servers in Westminster Still Don't Get it Do They?

Listen up you Main Stream Media Muppets, we don't care what he earns. People believe in him because he believes in us and we all share a collective belief in the UK, unlike most other politicians on the same money or more.

Just like Trump, Nigel can communicate with the people and no amount of smearing is going to deflect them from voting for him as they understand that Nigel is the only politician in UK history who had a single goal, the referendum, and actually achieved it after 21 years. The fact that he and we have been cheated out of our victory is the reason why he is back and millions are supporting him.

The Guardian is kept afloat by a charity and handouts from its dwindling band of readers. Meanwhile, Channel 4 News is funded by the public purse and watched by one man and his dog, (sorry one non-binary person and their dog) and both are just so desperate to try and stop the Brexit Party.

However, with every misspelt word they write or biased news report they broadcast they just increase the support for Nigel.

Andrew Marr (Paid by a compulsory Poll Tax) and the Biased Broadcasting Corporation had a good go last week, now the others are joining in. Then they accuse the Russians or the Alt-Right or Trump of interfering in UK politics. Give us a break please!

What they should be concentrating on is the betrayal of the people by the political elite or how about the expenses scandal that is brewing again with hundreds of MPs having their credit cards taken off them for misuse?

Or how about talking about the mad woman in Number 10 who is refusing to step down and is so deluded that she thinks she can still get her lousy EU betrayal deal through.

May, Corbyn and Jon Snow Despise Us
Thank God that, at last, the 1922 Committee, led by Graham Brady have shown some bottle and despite her pleading and crying (dry your tears love!), have told Theresa May she has to be gone in all but name by June 30.

Rumours are that they have let her stay until then so at least she has served as PM a few days more than that other miserable failure and wrecker of the British economy, useless Gordon Brown. If this is true it furthers the belief that UK politics has become a pantomime or is it a tragi-comedy?

Brown and May could never and will never be leaders whilst I still have a hole in my underpants. However, both somehow convinced their lickspittle mates in the controlled MSM that they were good at their previous jobs, one as Home Secretary and the other as Chancellor and then they were over promoted to lead our nation.

Brown with his boasts of, ‘no more boom and bust' of course was actually a busted flush who sold off our gold reserves for less than Jack got for his pantomime cow. May slashed 20 thousand police jobs and turned our major cities into crime-infested knife and gun crime capitals of the world.

Gosh they are both so talented!

But the sad facts are they were probably the best of a bad bunch.  I mean seriously, come on would you give any of the Muppets in Westminster a job in the real world?

READ MORE: The Day Democracy Died in the UK

And this is the point, our parliament is devoid of any real talent, skill or experience of the real or our world and most of them have never had to ‘turn a dollar' in their lives.

Straight out of Oxbridge and the Labour or Conservative club they land a researcher's job with one of the main Parties and then as long as they tow the party line, never express their true or an original thought they get parachuted into a safe seat.

MP's may as well be created in a factory, probably in silicon valley as they are all virtual signalling, social warrior clones.

Where are the mavericks? The individuals? The Tony Benns, Keith Josephs, Norman Tebbits, Dave Nellists?

Nowhere is the answer, because politicians and politics have become vanilla, and as proved by the Brexit betrayal you could not put a poppadum between the main parties for all their bluster. They all hold the same liberal, hand wringing, PC, Common Purpose cultural Marxist view of the world and they all hold the masses, the working class, in disdain.

No Taxation Without Representation!
Look at how they have overreacted by ordering an inquiry into reality TV shows after the Jeremy Kyle saga. They are more concerned about what we watch than the fact that they are ignoring the wishes of the people who put them in power. The PM expressed, ‘concern' over the alleged suicide from the Kyle programme. Well listen up Theresa, I and 17.4 million others are expressing concern about your and the other self-servers refusal to carry out our simple instruction of three years ago to leave the EU.

And that is why we are now supporting Nigel and making plans for him.

He doesn't need a manifesto and the Elite hate that, don't they? But he doesn't need one because there is only one concern at the moment and that is to get our country back.

Once we are a free Sovereign Country again we can concentrate on the colossal waste of money that is being spent on Hs2, which is twenty years too late in arriving!

Then we can sort out our own laws and crack down on the feral and the feckless yobs who are plaguing our streets.

Then we can secure our borders and decide for ourselves who we want to live in our great country.

Then we can trade with whichever Countries we choose.

Then we can protect and secure freedom of speech and expression

Then we can truly put the Great back into Britain.

And by the way, despite the controlled MSM smears against Nigel and the millions of those who support him, none of the above sounds FAR RIGHT.

To me and millions of others in the UK it just sounds RIGHT.