Scholar: Tories Could Back May's Brexit Deal Out of Desire for Self-Preservation 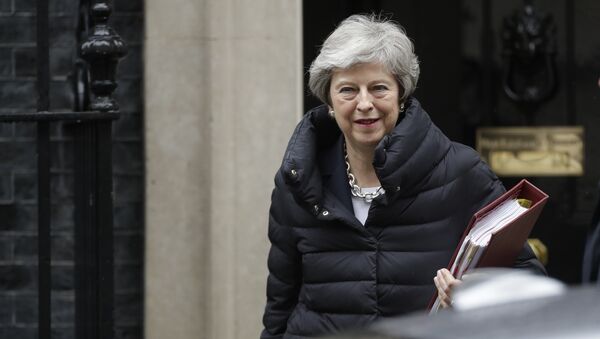 © AP Photo / Matt Dunham
Subscribe
UK Secretary of State for International Trade Liam Fox has said that Britain will have to cancel Brexit or leave without a deal if MPs don't support the prime minister's deal. Fox said he hopes that MPs will back the Withdrawal Agreement Bill next month. There's speculation that if Theresa May loses the vote, she will be forced to resign.

Sputnik: It has been reported that Theresa May and her Cabinet have decided to reject the customs union, which has been a vital point in their agreement with the Labour Party. Does this mean that talks with Labour will collapse this week?

Lee Jones: If that’s true, I haven’t seen that news myself, but I’ve never expected the talks to yield very much, because the changes that Labour want to see might pick up some Labour votes, but they would lose votes on the Conservative side. I also think that the Labour Party would not agree to any deal that didn’t have some kind of lock-in, because anything that they just agree, that goes into a political declaration, could be overturned by a new prime minister or a new Parliament. So presumably they would seek some kind of lock-in, like a second referendum, for example, which the Conservatives can’t accept; so they just have irreconcilable preferences, it never seemed to me that the talks were ever going to achieve very much.

Tories Split As May Faces Coup Amid Struggle to Pass Brexit Deal Through Parl’t
Sputnik: Speaking about Theresa May's a Brexit plan, does it mean that the plan that she has decided to present on 6 June will be her last attempt to break the Brexit deadlock, and if it fails, will she resign?

Lee Jones: To be honest with you, I really don’t know. She has said that she will stay on until the Brexit deal is done; but you know, I just don’t see how the arithmetic in Parliament has changed fundamentally. She's say now: “It’s my deal or there’s no Brexit, or second referendum”. Well, she was saying that months ago and Parliament was not scared by that into voting for her deal, and I don’t see what would’ve changed now, to be honest with you. Even with the rise of the Brexit Party, I don’t think it’s going to scare Parliament enough into backing a deal that nobody particularly likes. She must have a breaking point at some point in time, but she’s also incredibly tenacious. It’s difficult to see what anybody would do either, if she’s replaced by somebody else. If there was a Brexiteer prime minister that was willing to take the UK out of the EU without a deal, without any reference to Parliament, because certainly there isn't a majority in Parliament for that either. I think part of the reason why she’s still in office is because nobody else can see exactly how they would get anything through this Parliament either.

Sputnik: You mentioned the Brexit Party — how are the European Parliament elections going to affect the withdrawal process? If the Brexit Party has good electoral results, could this be a decisive moment in the whole Brexit saga?

Lee Jones: I don’t think so. You have to remember that the European elections are taking place on the basis of a proportional representation system, and that allows the challenger parties like the Brexit Party, or previously like UKIP, to take a large number of seats and a large share of the vote, but if you look at the Westminster elections, first of all, the Brexit Party is not polling as highly, it’s on about 34% in the European election, and about — 20% in Westminster and because of the “first past the post” electoral system, even if they go 20% of the vote, they could still get zero seats. And even though Labour is losing support, the Tories are losing even more support. At the moment, from the Labour Party's perspective, even though they're haemorrhaging support, they could still win a general election and squeak into power with a minority government. Precisely because of the unrepresentative voting system, the Brexit Party is not an existential threat for the Conservatives or the Labour Party. So, I think the people who are in Parliament, and Parliament is dominated by people who voted to remain, that's their basic preference, the people in Parliament can see the pressure and can see that people are angry, and they’re going to express their anger through the European elections, but they can still evade the consequences of that anger. So some of them will not see any reason to change their position, I think. Although the Brexit Party's emergence and explosive growth is quite remarkable, because it doesn’t change the actual situation at Westminster I think it won’t have the impact on voting decisions that you might think.

‘No Chance’ Theresa May’s Brexit Deal Will Get Through Parliament – Journalist
Sputnik: You've mentioned that it won’t result in an electoral breakthrough with the current parliamentary system, but don’t you think that the Brexit Party from the one side, and Change UK and the Liberal Democrats on the other side, will incline other parties to move in their own directions — like the Conservatives could move towards a no deal Brexit and Labour might move more to a second referendum…

Lee Jones: The Labour Party’s position is really dominated by people pushing for a second referendum, senior people in the party are already saying: “We are a 'remain and reform' party”, that is what the deputy leader said. So there's Labour Party's policies on paper, which are supposed to be respecting the referendum result, and going for a general election, but in the end, it comes down to a second referendum, and that’s the direction.

As for the Conservatives, they can see that their support is in full-scale meltdown and if anyone is going to suffer from the emergence of the Brexit Party, it’s certainly the Conservatives — though it’s possible that some more MPs on the Conservative side, just out of a desire for self-preservation could agree to Theresa May's deal, I think that’s possible. But still I think the DUP will not support it, because of the backstop — I don’t see that their position has particularly changed, they’re not going to do anything to help prop up the Conservative Party; and of course, the Brexit Party does not really figure in Northern Ireland. The Labour Party, I don’t think, is going to change its position that much, the kind of people that would support Brexit have already done so in various ways — the working class constituency representatives, some of them have split. It might shift some votes, but I don’t think it’s going to be enough to get it over the line.

Nigel Farage’s Brexit Party Would Hammer Tories in General Election - New Poll
Sputnik: Quite a lot of people argue that this is just the beginning of a serious reconstruction or reforming of the UK electoral and political system; a lot of people are saying that we need a proportional representation system. Do you think Brexit is a first step in that direction?

Lee Jones: That’s what I had always wanted it to be, as somebody on the political left and that’s what the Full Brexit, the group that I’m part of, always argue for: that breaking out of the European Union could be the beginning of a democratic revolution in British society. But the left has kind of missed that opportunity, I think, by siding with the status quo. For things to really change, the major political parties would have to agree to and legislate these changes. They would have to have the mainstream parties enacting proportional representation and that would lead to their destruction; so just on grounds of self-preservation alone, there’s absolutely no way they would enact proportional representation, and I don’t see that there’s any appetite in the Commons for abolishing the  House of Lords either. What you have is a political establishment that is absolutely resistant to any substantial changes to the way the country‘s governed, economically and politically. That’s why we are in the situation that were in now; they don’t really want to change British society, or British politics, or the British economy. They want to try to keep it the same, ideally by staying in the European Union, and if not, by maintaining the closest possible alignment to the European Union. What people are hungry for, and I think it’s true both on the remain and the leave side of the electorate, it’s really substantial change. People are very dissatisfied with the Westminster establishment, with the way the economy is managed, the way it’s really difficult for people to get on in life. They would like some really substantial change and shake up, but the political establishment is not representing and channelling those desires at the moment and I don’t see any move towards doing so.