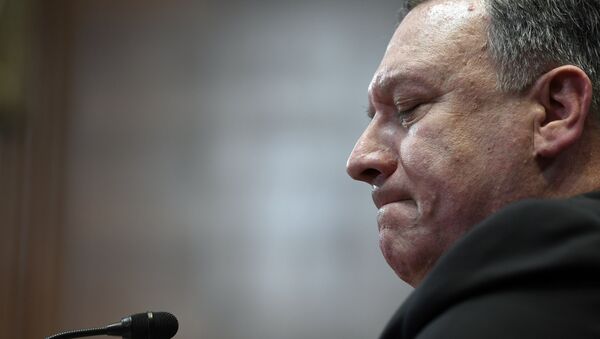 "Oh goodness, you know very little surprises me with Guy. So no, I can't say I was terribly surprised the President Putin's view on the Mueller report," Pompeo told the Fox News broadcaster on the Guy Benson Show late on Thursday.

Pompeo recalled that during the talks, Putin pointed to the issue of the alleged collusion between the Trump campaign team and Russia as the core finding from the Mueller probe.

"I think he had felt burdened by that and that he feels as though President Trump was burdened by that as well. So I think in that sense he was saying, hey the deck — the idea that somehow there had been direct collusion between President Trump and the campaign and the Russian leadership. The fact that the Mueller report dispelled that, I think he found useful as a turning point to try and find a better way for conversations between our two countries," Pompeo pointed out.

World
Pompeo Leaves Russia With Arms Control Plan, Hope for Improving Relations
The negotiations took place on Tuesday. During the talks, Putin said Mueller had conducted an objective probe into the alleged collusion between the campaign team of US President Donald Trump and Russia in the run-up to the 2016 US presidential election. Putin added that there was no and could be no interference in the election on the state level on the part of Russia. The months-long probe, which was repeatedly slammed by the Trump administration as a witch-hunt, found to proof of collusion.

Both Russia and the Trump administration have repeatedly denied any collusion. Moscow has also denied the allegations of meddling in the US election.