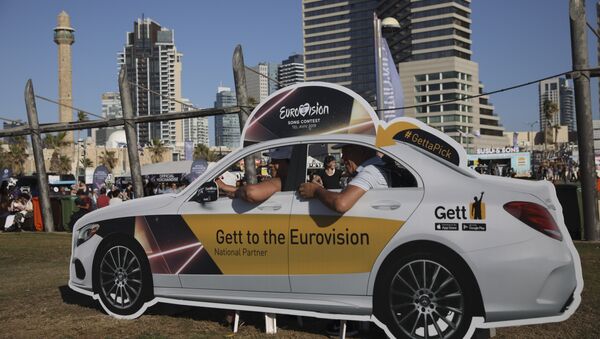 Mr Gunness was a spokesman for the United Nations Relief and Works Agency for Palestinian Refugees at the time. He was asked to comment on an Israeli Defence Force attack he had witnessed. The attack was on a United Nations school shelter. At least 15 people were killed before his eyes. Most of those killed were women and children. He burst into tears and couldn’t complete the interview but he was able to make one statement:

“What is happening in Gaza, particularly to the children, is an affront to the humanity of all of us”.

Set aside your popcorn for less than a minute. Put down your glass of wine, can of lager, cup of tea or whatever is your refreshment of choice and click the link to that interview and then ask yourself if it is consistent with our common understanding of respect for human rights for you to watch the TV coverage of the Eurovision song contest broadcast from the Tel Aviv capital of the nation responsible for the daily slaughter of defenceless citizens and the denial of their most basic human rights to water, medicines, electricity, homes, freedom of movement and life itself?

Israel is a nation which practices and imposes an inhumane and dehumanising form of apartheid on the people of Palestine akin to that once practiced by the white supremacist government of South Africa against the majority black population between the years 1948 — 1994. It was absolutely right to boycott South Africa in any way possible to try and bring down the apartheid system. Culturally, economically, politically, in the fields of sport, academia and all other forms of contact to force them to desist from their denial of basic human rights was key to the eventual liberation and enfranchisement of the 70% black population of South Africa. That and determined and incredibly courageous resistance by black South Africans.

Tel Aviv Fears Israel May Be Hit in the Crossfire If US and Iran Go to War
When the likes of international celebrities like Madonna decide to ignore the pleas of the Palestinian Artists Association to boycott the Eurovision song contest because it is being hosted by Israel and used by them to try and "perpetuate oppression, promote injustice or whitewash a brutal apartheid regime" she is effectively surrendering her right to ever pontificate about respect for human rights. She is no doubt being paid a huge fee for her participation but integrity is priceless and artists like her who choose to ignore the daily human rights abuses perpetrated by Israel will never be able to buy back their integrity. Once sold it is gone forever.

As the rock legend and icon of Pink Floyd fame, Roger Waters, said in support of the boycott of this years’ Eurovision song contest, and of Israel culturally, participation normalises the ‘slaughter’ of defenceless human beings:

"To perform in Israel is a lucrative gig but to do so serves to normalise the occupation, the apartheid, the ethnic cleansing, the incarceration of children, the slaughter of unarmed protesters… all that bad stuff,".

If Madonna is not prepared to listen to Roger Waters perhaps she should listen to the heroic leader of black South African resistance to apartheid, Nelson Mandela, speaking in 1990:

“If one has to refer to any of the parties as a terrorist state, one might refer to the Israeli government, because they are the people who are slaughtering defenceless and innocent Arabs in the occupied [Palestinian] territories, and we don’t regard that as acceptable”.

Or his words eleven years later in 2011:

“Apartheid is a crime against humanity. Israel has deprived millions of Palestinians of their liberty and property. It has perpetuated a system of gross racial discrimination and inequality. It has systematically incarcerated and tortured thousands of Palestinians contrary to the rules of international law and waged war against a civilian population, in particular children”.

And if the words of political heroes like Nelson Mandela or music legends like Roger Waters don’t mean anything to Madonna I would invite her to read the 2019 Report of the New York based non-governmental body established to conduct research and advocacy on human rights across the world, Human Rights Watch:

“The Israeli government continued to enforce severe and discriminatory restrictions on Palestinians’ human rights; restrict the movement of people and goods into and out of the Gaza Strip; and facilitate the unlawful transfer of Israeli citizens to settlements in the occupied West Bank."

Israeli forces stationed on the Israeli side of the fences separating Gaza and Israel responded to demonstrations for Palestinian rights on the Gaza side with excessive lethal force. Between March 30 and November 19, security forces killed 189 Palestinian demonstrators, including 31 children and 3 medical workers, and wounded more than 5,800 with live fire”.

Is it any wonder given Israel’s imposition of a brutal apartheid regime against the Palestinian people in the illegally occupied territories of Gaza and the West Bank that Israel stands ashamedly as the most condemned nation in the world in relation to human rights abuses?

The United Nations (UN) is the world body established to monitor and record the conduct and actions of sovereign nations across the globe. When countries are found to be violating basic human rights they are issued with UN human rights violations condemnations. The UN issued 27 such condemnations in the whole of 2018. Iran, Syria, Russia, the United States of America, North Korea and Myanmar all received 1 condemnation each. Israel received 21 condemnations.

Israel Has Chosen Place in Golan Heights to Build Village Named After Trump - PM
Israel is guilty of scores of human rights abuses in respect of illegal occupation of land belonging to Palestine, the expulsion of Palestinians from their homes and erection of illegal settlements exclusively for Jews contrary to international law but the most deadly contravention of human rights laws are in relation to blockades of the essentials of life like water and electricity and the use of illegal force against protesters who pose no threat to life.

In March this year the UN Human Rights Council condemned Israel’s “apparent intentional use of unlawful lethal and other excessive force” against civilian protesters in Gaza, and called for perpetrators of violations in the enclave to face justice. A resolution was passed at the end of a four week session which called for cooperation with the International Criminal Court investigation began in 2015 into Israel’s illegal actions and killing of Palestinian civilians.

The resolution was based on a report by a U.N. inquiry which said that Israeli security forces may have committed war crimes and crimes against humanity in killing 189 Palestinians and wounding more than 6,100 at weekly protests last year.

Tragically today, May 15th, Israeli soldiers shot between 16 to 65 protesters in Gaza, including 22 children and 3 paramedics according to the beleaguered Gaza Health Ministry. Thousands gathered near to the illegally erected fences within Palestine’s lawful territory to protest their expulsion from the homes and land they used to own and occupy until their forcible expulsion in 1948.

The UN have concluded that Israel may be guilty of “war crimes” as army snipers with brazen disregard for international laws and rules of engagement “shot at journalists, health workers, children and persons with disabilities knowing they were clearly recognisable”.

According to the UN Humanitarian Office in the Occupied Territories, OCHA, over 330 Palestinians have been killed by Israeli forces in the past year and almost 35,000 injured, as protesters seek return of the territory and homes their families and fellow Palestinians were expelled from 70 years ago in what they refer to as the Nakba, or Catastrophe – in reference to the forced removal of 750,000 Palestinians from their homes and villages to make way for the creation of the new state of Israel in 1948.

So there you have it Madonna. Enjoy your performance and  remuneration from a regime daily committing human rights abuses and war crimes as they target “children and persons with disabilities” in their brutal campaign to maintain Israeli superiority and expansion further into land which legally belongs to the state of Palestine.

Allegations and counter allegations will always generate furious debate and dispute given the passions and fixed positions of those involved in Middle-East politics. Some will sympathise with Israel and prefer their version of events based on security worries and threats. I reject their narrative. I believe Israel is the primary aggressor and perpetrator of human rights abuses in the region.

The wider and broad Boycott, Disinvest, Sanctions Campaign (BDS) exists to end international support for Israel's oppression of Palestinians and pressure Israel to comply with international law and deserves massive support but if you have any respect for human rights at all and empathy for civilians suffering daily from Israeli apartheid please do the right thing and boycott the Eurovision song contest being broadcast from Israel this Saturday. It’s not just about music it’s about respect for humanity and human rights.