Theresa May in TEARS Amid Resignation News, Boris Johnson Ready to Join The Fray 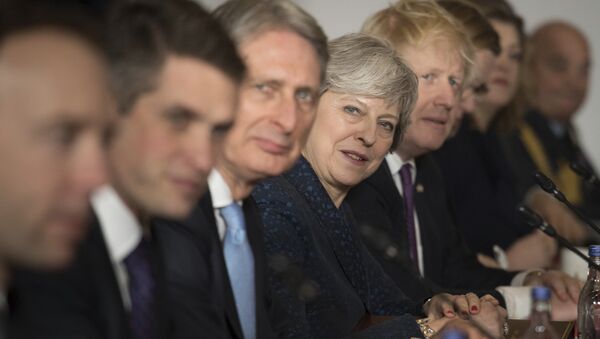 © AP Photo / Stefan Rousseau
Subscribe
British Prime Minister Theresa May will be offering a timetable for her departure from Downing street early next month after a meeting with senior Tory MPs who insisted she set the date for vacating her post.

One No. 10 source, reports the paper, warned that May was still at least 80 MPs short of passing the legislation, adding: “If the Bill falls, everyone knows what comes after that. It’s the last act of this government.”

This defeat would trigger May’s resignation and launch a leadership contest before the summer break.

‘No Chance’ Theresa May’s Brexit Deal Will Get Through Parliament – Journalist
Former foreign secretary Boris Johnson has thrown his hat in the ring, joining the growing list of Conservatives who say they will stand for a leader once UK PM Theresa May announces her exit date, according to media reports.

When asked at a business event in Manchester if he would be a candidate, Johnson rushed to announce that "of course" he would put himself forward to be the next Conservative Party leader, once the contest begins.

READ MORE: British PM May Agrees to Set Timetable for Her Resignation

Several Tories have said they will quit the party if Johnson becomes PM, writes the Mirror.

Despite surviving a no-confidence vote last December, the British Prime Minister has been forced by senior Tory MPs to offer clarity regarding her exit date amid the Brexit deadlock and Conservatives' failings in recent local elections in the UK.

Speaking in the wake of the UK PM's showdown with her fellow Tory MPs, Sir Graham Brady, chairman of the 1922 Committee, said he will meet May to agree on the details of her leaving Downing Street and discuss her future following the first debate and vote on the Withdrawal Agreement Bill in the week beginning 3 June.

The Tory backbench chief said: “We have agreed to meet to decide the timetable for the election of a new leader of the party as soon as the second reading has occurred and that will take place regardless of what the vote is on the second reading, whether it passes or whether it fails.”

Tories Split As May Faces Coup Amid Struggle to Pass Brexit Deal Through Parl’t
Media reports have been saying May’s looming departure is reminiscent of Margaret Thatcher’s choice to step down in 1990, similarly urged by the chairman of the 1922 committee that it was high time.

According to UK media reports, Johnson is understood to be pressing Tory MPs with small majorities in marginal seats to offer him backing, as he believes he can rescue seats that might otherwise go to Labour or Nigel Farage’s Brexit Party.

Reportedly there has been pressure for the contest to take place before summer, yet with such a wide field of contestants, it could take months, with a leader announced at a party conference this autumn.