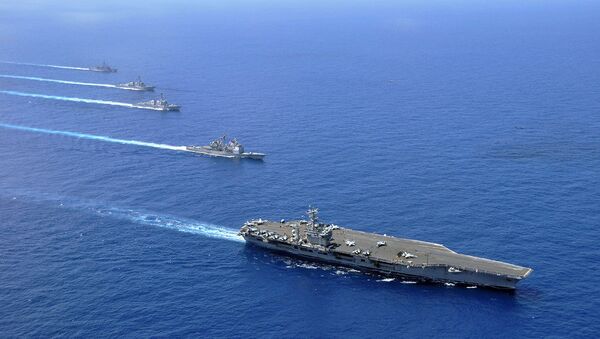 US Chief of Naval Operations Admiral John Richardson has urged Southeast Asian nations to hammer out their own response to what the White House has described as Beijing’s “militarisation” of the South China Sea.

“I think every nation is going to have to assess the situation and their own approach. But at some point, navies are meant to get under way and be present and provide options to their [countries’] leadership. How they choose to do that is a matter of their national, sovereign approach”, he told the newspaper Sydney Morning Herald.

In this context, Richardson specifically singled out Australia and Indonesia, praising them for adhering to a rules-based international order.

Indonesia does not claim any of the disputed islands in the South China Sea, but it wants sovereignty over a section of what it calls the North Natuna Sea, part of which is also claimed by China. Australia doesn’t have South China Sea-related claims either, but it has consistently called for all nations to have free access to the area.

“Where we can see opportunities to work together, exercise together, be present together, those I think are [things] that we are constantly looking for […] with both of those navies,” he pointed out.

Commenting on the US’s “freedom of navigation” missions in the area, Richardson claimed that they were “certainly not meant to be provocative”.

“This is part of the way the US shows its strong advocacy for the rules-based order”, he said.

The statement comes after China expressed its “resolute opposition” last week to the passage of two US guided-missile destroyers near the Spratly Islands, claimed by Beijing in the South China Sea.

Beijing has repeatedly accused the US of provocations in the South China Sea and warned the country against sending vessels and warplanes close to the islands and reefs claimed by Beijing.

Pentagon Chief: US ‘Cannot Accept’ China’s ‘Militarization’ in South China Sea
Beijing demands that the US should “stop actions that undermine China's sovereignty and security interests", while Washington insists that it is conducting “freedom of navigation” operations in the area. US is also concerned over China's construction of industrial outposts and military facilities on artificial islands in the South China Sea, with Beijing saying that it has the sovereign right to send troops to any part of its territory.

China currently controls vast majority of islands, reefs and shoals in the area, which is also claimed by the Philippines, Vietnam, Brunei, Malaysia and Taiwan.

000000
Popular comments
Trump is asking his servant to obey his orders. However, the vassal countries should take the opportunity (the USA is weak in international affairs) to reject him as a international bully that is endangering the world peace.