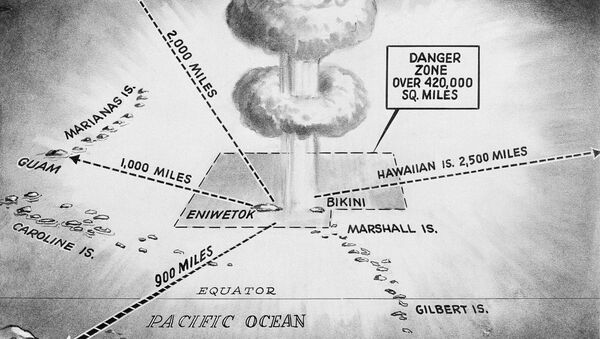 Speaking to students in Fiji Thursday, UN Secretary-General Antonio Guterres highlighted the ongoing health problems people in the region suffer as a result of the nuclear testing of past decades and expressed concern that a “coffin” built to contain nuclear waste in the region could begin leaking, with disastrous consequences.

Responding to a question from a student at the University of the South Pacific, Guterres noted, "The Pacific was victimized in the past, as we all know," referring to the nuclear explosions conducted by the United States and France over several decades at Pacific locations, including in the Marshall Islands, where the US forcibly evacuated and resettled entire populations to conduct some of its 67 nuclear weapons tests.

The H-bomb Test at the Bikini Atoll and Its Consequences. Archive Footage

In addition to being forced from their homes, Marshall Islanders have suffered health problems and been cut off from their heritage and traditions as a result of the tests, and their compensation is often decried as inadequate. Even US soldiers sent to clean up after the nuclear carnage have been sickened — and are also ignored, a 2017 ABC article revealed.

But the damage is not confined to the past. "I've just been with the… president of the Marshall Islands, who is very worried because apparently there is a risk of leaking of radioactive materials that are contained in a kind of coffin in the area," he continued.

The nuclear coffin is Runit Dome, a huge concrete structure built to store the 85,000 cubic meters of contaminated debris and soil generated by the dozens of US tests in the area. The people of the area call it "the tomb." Now, they're afraid the passage of time — and climate change — won't let the dangerous contents rest easy.

The dome is cracking. As Sputnik reported last year, a 2013 report commissioned by the US Department of Energy revealed that radioactive materials were indeed seeping out of the dome into the surrounding soil. If rising seas caused by by climate change penetrate the dome, that local problem could become a global nuclear crisis, as ocean currents would distribute the waste around the world.

But no one seems willing to take ownership of the problem. Mark Willacy of the Australian Broadcasting Corporation, who has visited the atoll to report on its status, told PRI in 2018 that the US "paid the Marshall Islands about $150 million, and said, ‘Right, all deals are done. There's no more claiming of compensation or anything like that."

"So, from the perspective of some in the United States government, there is no obligation to come back and clean up this dome or to fix it up. So, I think we're at a political stalemate, and that's the problem," he said.

"I think that a lot needs to be done still in relation to the consequences of the explosions that took place in French Polynesia and the Marshall Islands," Guterres said. "And this of course is to do with the health consequences, the impact on communities, to different other aspects, and of course there are questions of compensation, there are questions of mechanisms to allow for these impacts to be minimized as much as possible… it's a question that has not yet been entirely resolved."

Guterres is touring the South Pacific to raise awareness of climate change issues.