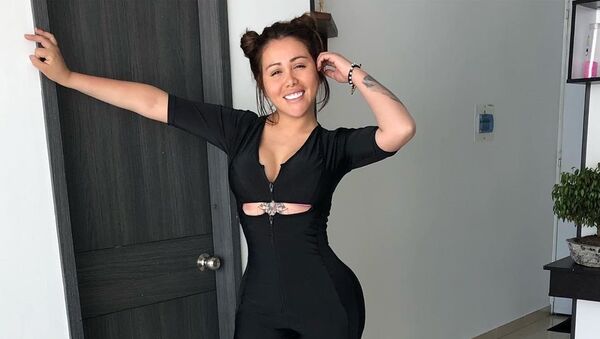 © Photo : Instagram/yinacalderonoficial
Subscribe
Now that most of her health issues are behind her, Instagram and reality show star Yina Calderon, who has previously flaunted her outstanding derriere numerous times, is warning others against the bum-enhancing surgery, among other medical interferences.

Colombian reality show star Yina Calderon has shared really shocking snapshots with her 593,000-strong army of Instagram subscribers, revealing that a number of “puffy balls” were left in her posterior after she had most of her bum implants removed. Below the thought-provoking pictures, she wrote in a straight-forward manner, hoping her experience would effectively put off the fair sex from dangerous cosmetic procedures:

“These balls in my buttocks are fibrosis not the biopolymers (implants), they are left behind by the surgery I subjected myself to”, the 27-year-old, who had the implants fitted three years ago to boost her low self-esteem, wrote.

After having the implants removed, she emotionally referred to them as “poisonous”, arguing they had an utterly detrimental effect on her overall health.

She says, as quoted by Unilad, that she has undergone 17 different beauty-enhancing surgeries, but suspected that something was wrong after the bum operation.

“I hope to serve as an example that in this f*cking life you should never have anything injected into you”, she wrote on Instagram, adding:

“We should say no to strange substances in our bodies, do what I suggest and say no.”

She went on to assert that “this poison kills and it hurts a lot.” “Thank God for my family, boyfriend and the surgeon for being in this difficult situation with me”, she said, sharing her gratitude after cautioning against everything she has had to go through.

With the surgeons having failed to extract 20 percent of the gel left behind in her bum cheeks, the therapy, including a series of massage, is continuing.

There are generally two ways to have derriere-enhancing procedures done – one by means of silicone implants or, alternatively, by transferring existing fat from other parts of the body, but it can also be a combination of both.

Meanwhile,  the liposuction and fat transfer procedure, which is more commonly referred to as a Brazilian butt lift, is believed to carry the highest health risks of all cosmetic procedures, with the current death rate estimated to be one in 3,000, according to PlasticSurgery.org. In a much publicised case last year, mum-of-three Leah Cambridge, from Leeds died following a £3,000 buttocks lift at a clinic in Turkey, having reportedly suffered three heart attacks, and ultimately a cardiac arrest during the operation.