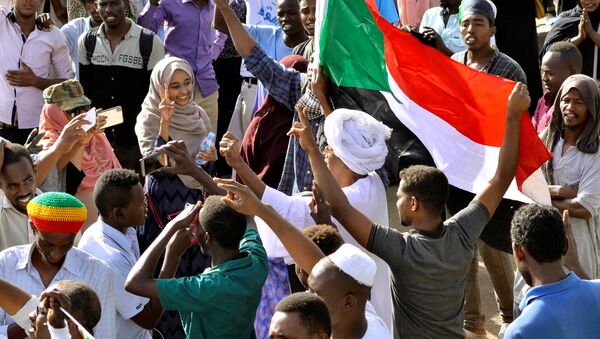 MOSCOW (Sputnik) – The Sudanese Transitional Military Council (TMC) said it has decided to suspend talks with the opposition for three days and remove all the barricades built by protesters in the country’s capital of Khartoum, local media reported on Thursday.

Al-Arabiya news outlet reported that the TMC had criticised the demonstrators for blocking off roads and bridges in Khartoum. However, the council reportedly pledged it would not use force to disperse the protesters.

Sudan's opposition alliance reacted to the move by saying that the suspension of talks with protesters was a "regrettable decision", Reuters reported.

Police Officers Beat Sputnik Correspondent in Sudan, Break His Equipment
Protests have been underway in Sudan for months. In April, they led to the overthrow of the country’s long-time President Omar Bashir by the military and the establishment of the TMC. However, the protests continued, calling for a transition of power to the civilian authorities.

On Monday, the TMC said it had reached an agreement with opposition forces about the structure of a transitional authority to govern the country. However, on the same day, gunmen dressed in Rapid Support Forces' uniforms attacked protesters in one of Khartoum's squares.

The TMC subsequently issued a statement, accusing third-party forces of staging the attack and trying to undermine its agreement with the opposition on the structure of transitional bodies.