'It Made Her Rich': Selena Gomez SHAMED for Saying SM 'Terrible' for Millennials 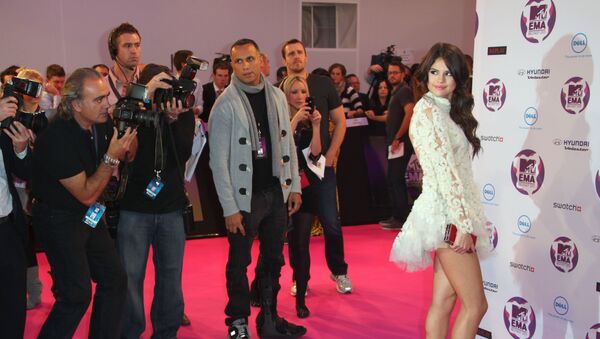 © AP Photo / Joel Ryan
Subscribe
International
India
Africa
Selena Gomez, the third most-subscribed Instagrammer, has voiced her concern about the “terrible” impact that social media has had on her generation, arguing that there should be lengthy breaks from online communication, which millennials are such passionate fans of.

Gomez, who boasts a whopping 150 million followers, trailing a little behind just two Instagram superstars, football ace Cristiano Ronaldo and pop singer Ariana Grande, told a press conference at the Cannes Film Festival that she “gets scared” when she looks at the exposure of young boys and girls on social media platforms, arguing they “are not aware of the news or anything going on”, as she put it.

"It's selfish — I don't wanna say selfish because it feels rude — but it's dangerous for sure", Gomez asserted, going on to claim:

"I think our world is going through a lot, obviously. But for my generation, specifically, social media has been terrible”, she said.

Many immediately took to Twitter to address the comments made by the wildly popular 26-year-old actress and singer, who is in Cannes to promote Jim Jarmusch's new zombie movie, "The Dead Don't Die”.

Amid an overwhelming chorus of praise for the “sincerity” and “honesty” that she demonstrated while addressing one of the “21st century diseases”, there also were sharp critical remarks.

She’s absolutely right. Social media has been terrible for most generations who participate. It’s a drug and we’re a nation of addicted zombies allowing the cancer to spread. Even when we acknowledge that fact, we can’t kick it. Case in point. This tweet.

I'm glad a young person has come out and said it! I believe it to be true.

She’s absolutely right. They are losing time and not spending time with families or studying. Start with Kylie Jenner and the Kardashian’s who promote sex and stripper looks and lifestyle.

What a lovely young woman. @selenagomez, you are a testament to young people and we are all proud of you.

True…millennials for some reason think and feel that their validation is derived from likes and retweets…that is new!

Some even caught her exposing a double-standard, arguing that she is a social media brainchild herself and it is, to say the least, weird to address the millennials’ weaknesses in such a blatant way:

Then get off it

Many went still further by stating that it is social media that she owes her multi-million-dollar fortune to and urging her to be grateful for this:

Social media made you rich

Only if you are famous honey. You probably catch a lot of shit. Cause you are so dam pretty rich and talented. Be thankful. Lol

A few people, meanwhile, blasted her for being too “naïve”, pointing to the revelation Gomez derived from social media:

Social media is the mirror that came along & exposed us for what we have truly been all along. Gomez is just one more naive dreamer who thought humans were alot cooler than they really are. Social Media showed her they aren't & she can't handle it.

One even branded the brunette bombshell “Captain Obvious”:

It’s not the first time the actress has spoken out about the importance of taking social media breaks.

Speaking with Heben Nigatu on an episode of Coach's podcast, "Dream It Real", she said:

"It is not that healthy to be on [social media] all the time. I noticed with me, I got kind of depressed looking at these people who look beautiful and amazing, and it would just get me down a lot.”